Started out at the Post Office to mail some post cards. On the way there I spotted a bakery….so I had to stop! OMG! I had the most amazing cinnamon roll with cream cheese frosting and a chocolate TruMoo!

I headed out on the Whitefish Scenic Byway which follows the Lake Superior shoreline.

First stop Point Iroquois Light Station. Built in 1870 its purpose was to guide freighters safely between the open waters of Whitefish Bay and the St Marys River. To get to the tower to lighthouse you have to climb 72 steps! And, yes I did! 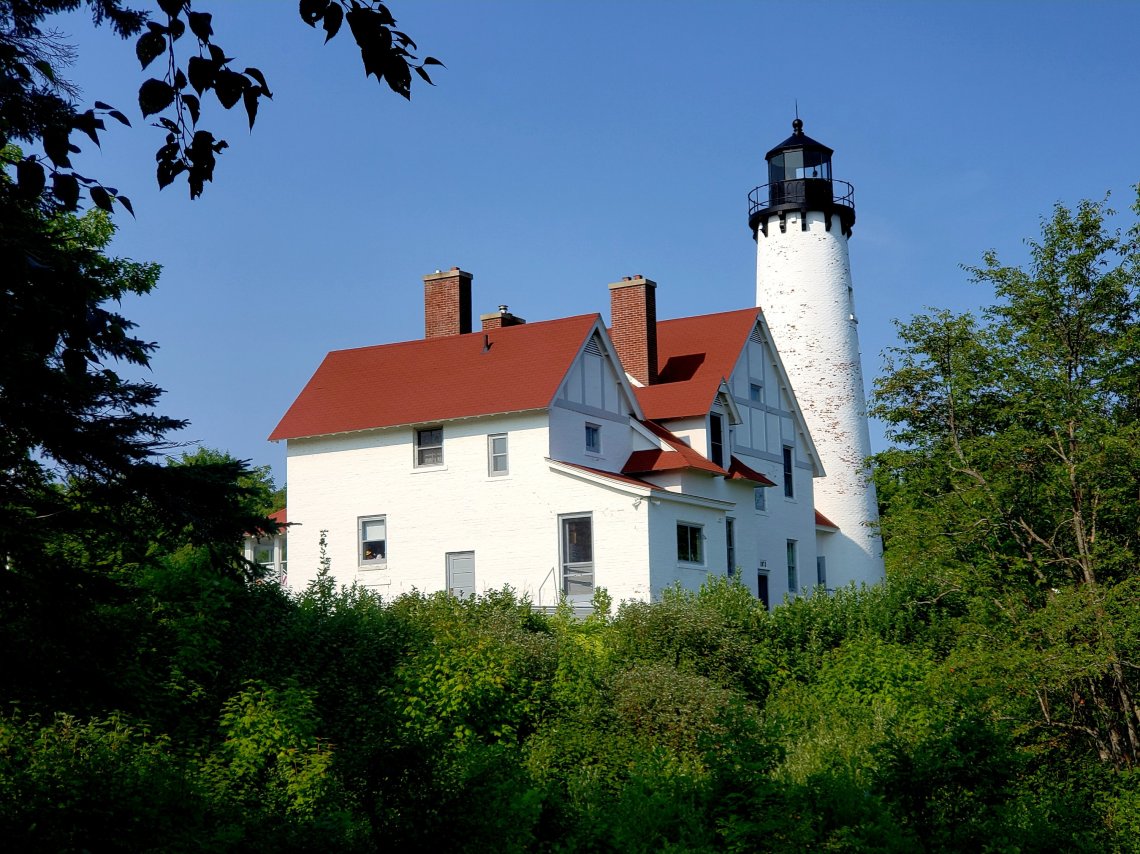 What a beautiful lighthouse and all at the cost of a donation.

As I made my way along the byway we stopped and took in the scenery of the Great Lake Superior. Harlie and Frannie seemed to enjoy the beach. 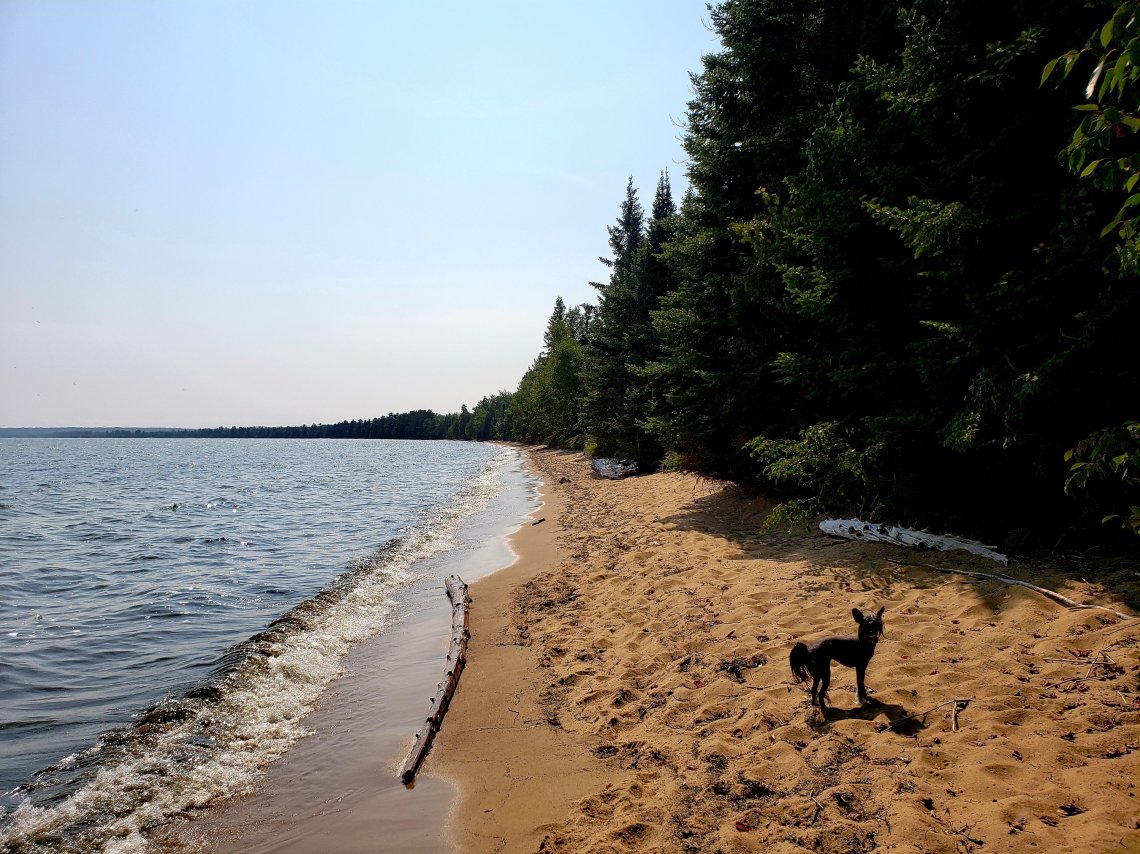 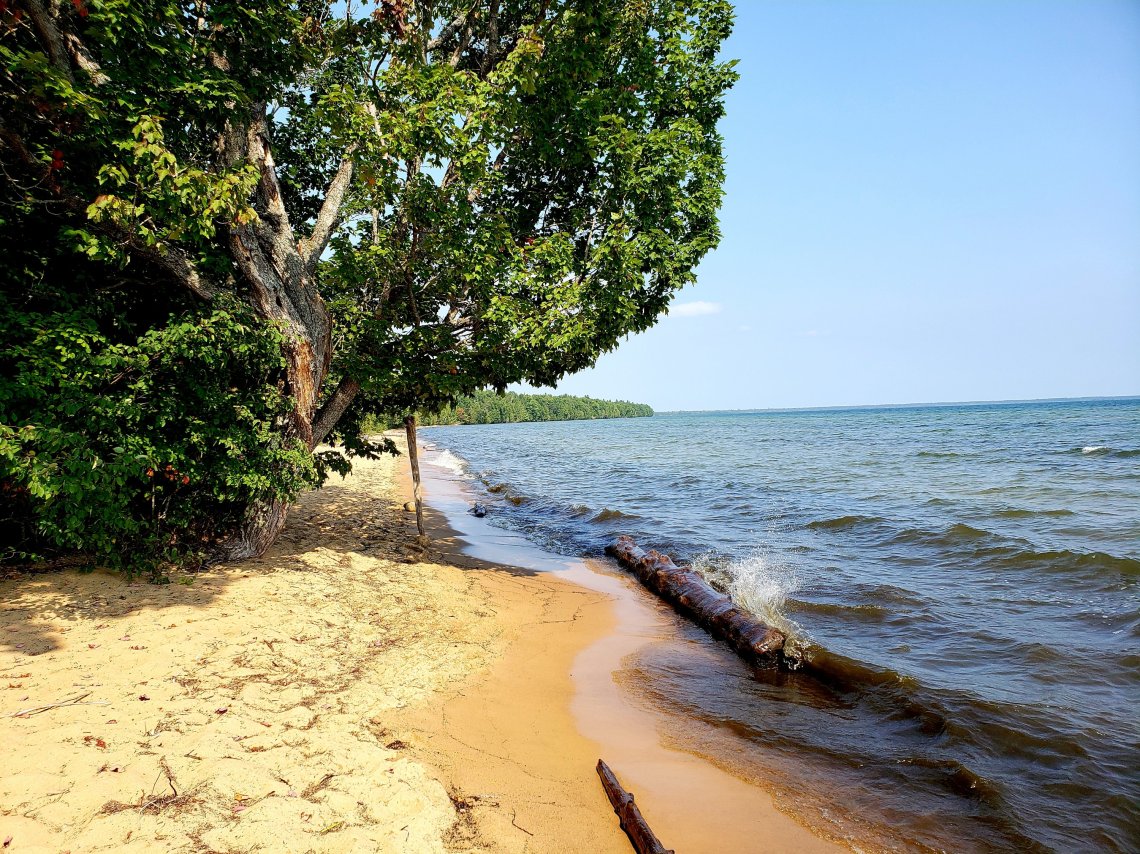 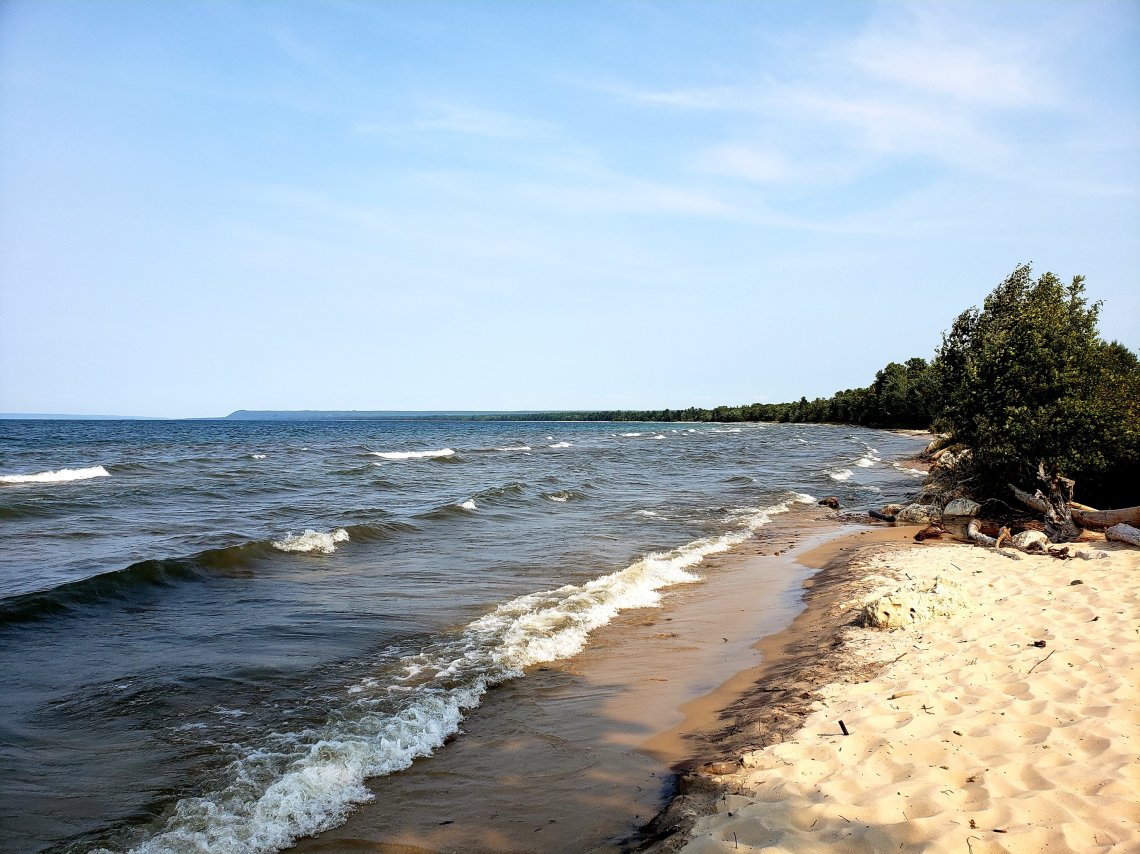 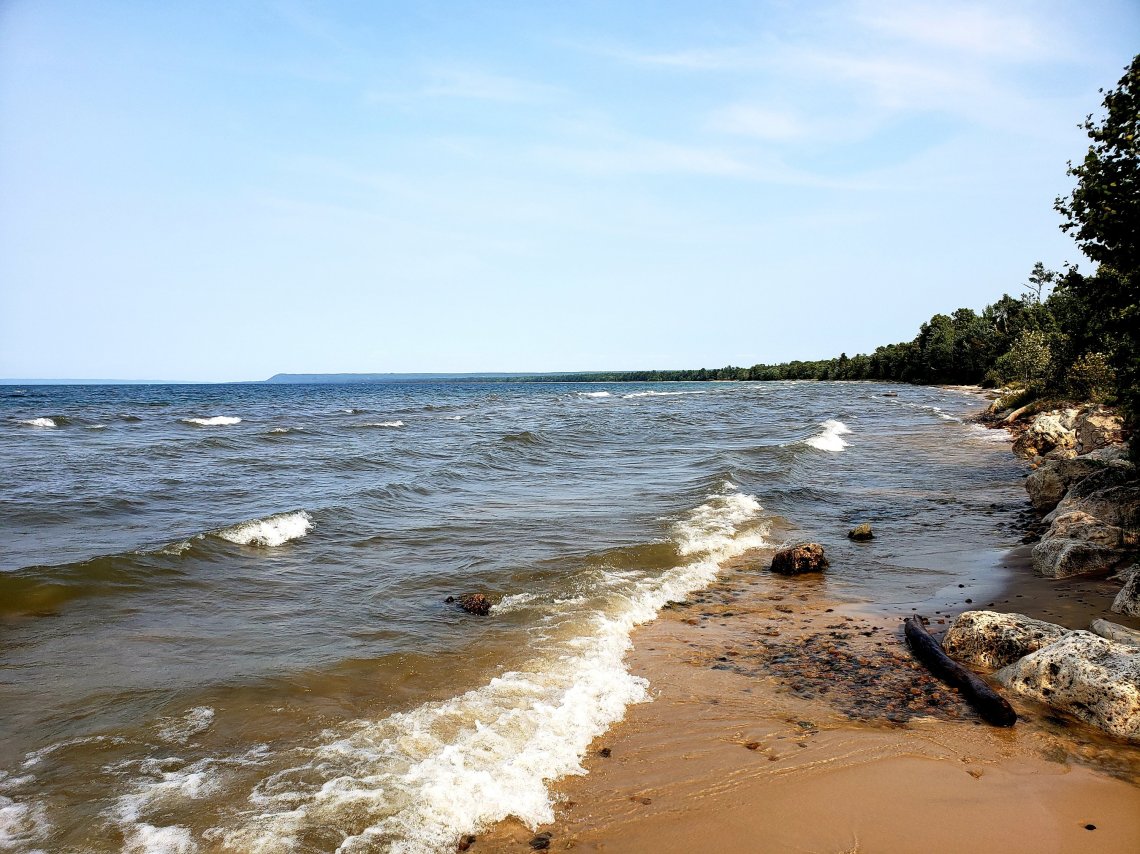 You know…there is nothing like a two lane road, the windows down and a cool low 70s day! 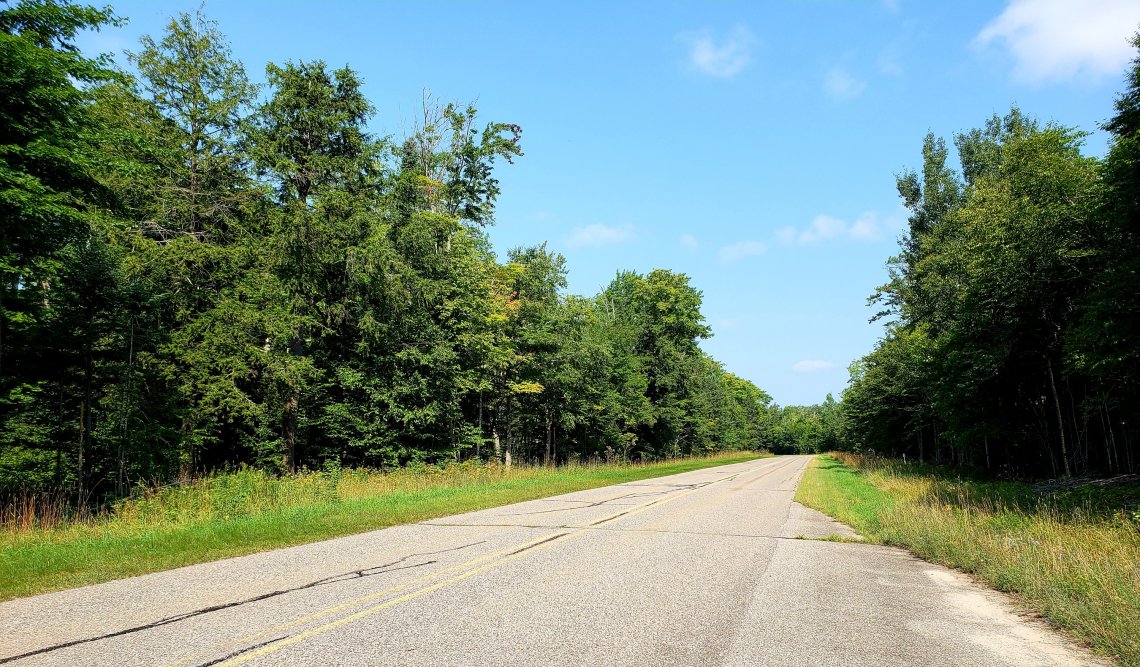 My next stop was Paradise. Literally Paradise! Ha ha 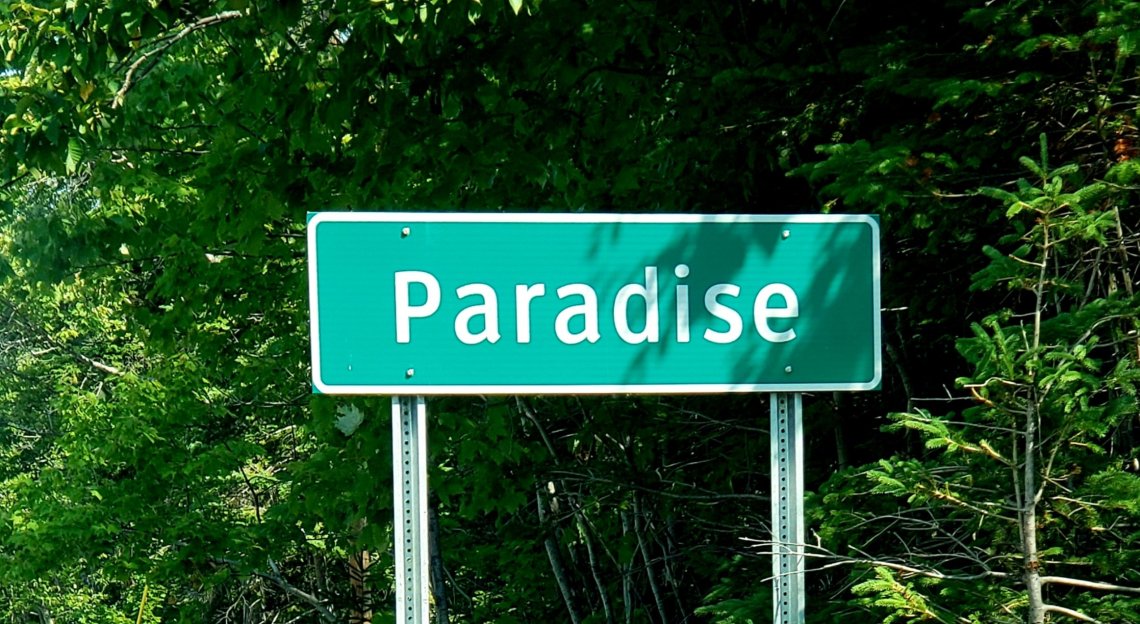 Not alot in Paradise except the Wild Blueberry Festival.

I ordered a brat and the guy asked me if I wanted a regular or blueberry. Really its a thing!

One of the places I wanted to visit while here was the Great Lakes Shipwreck Museum. So glad that I did. Besides the museum they have a theatre building, the lighthouse keepers quarters, the lighthouse tower, the fog horn house, the US Coast Guard surfboat house and of course a gift shop.

The museum is home to artifacts and exhibits from shipwrecks of Lake Superiors fury. One such exhibit is the Edmond Fitzgerald. The ship lies just 17 miles off the shore of Whitefish Point. 29 men lost their live on November 10, 1975. Have you ever listened to the song? It’s haunting. 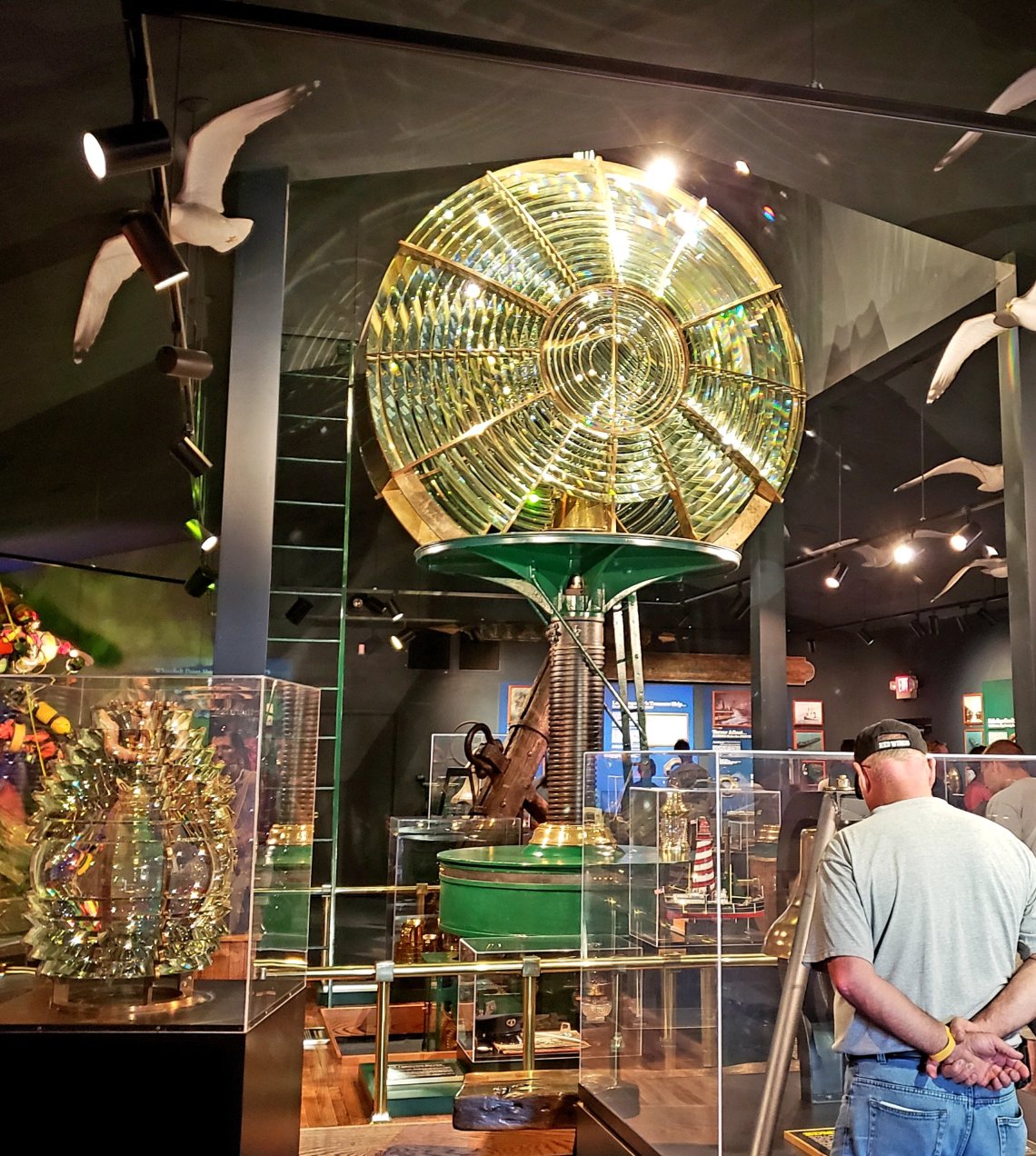 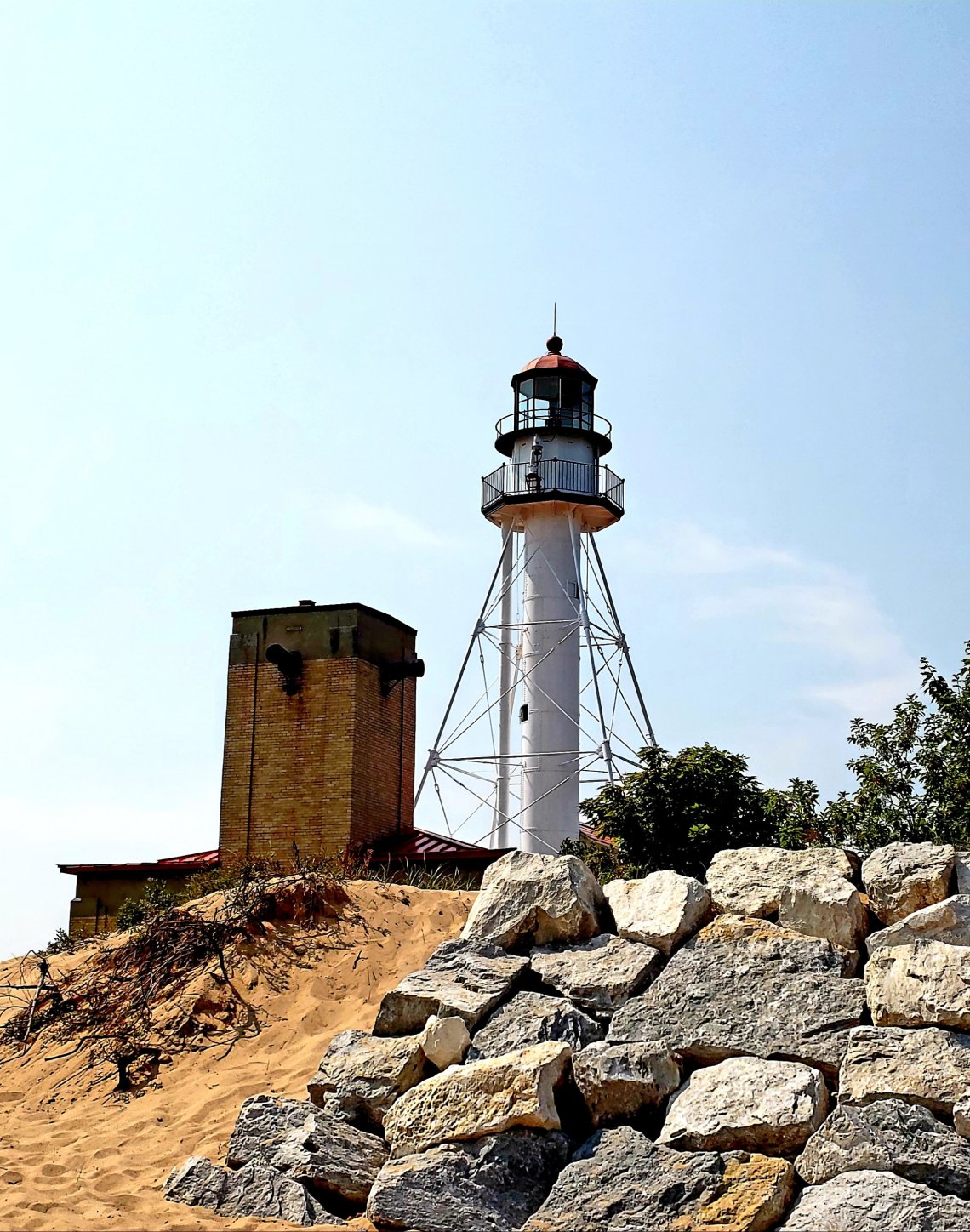 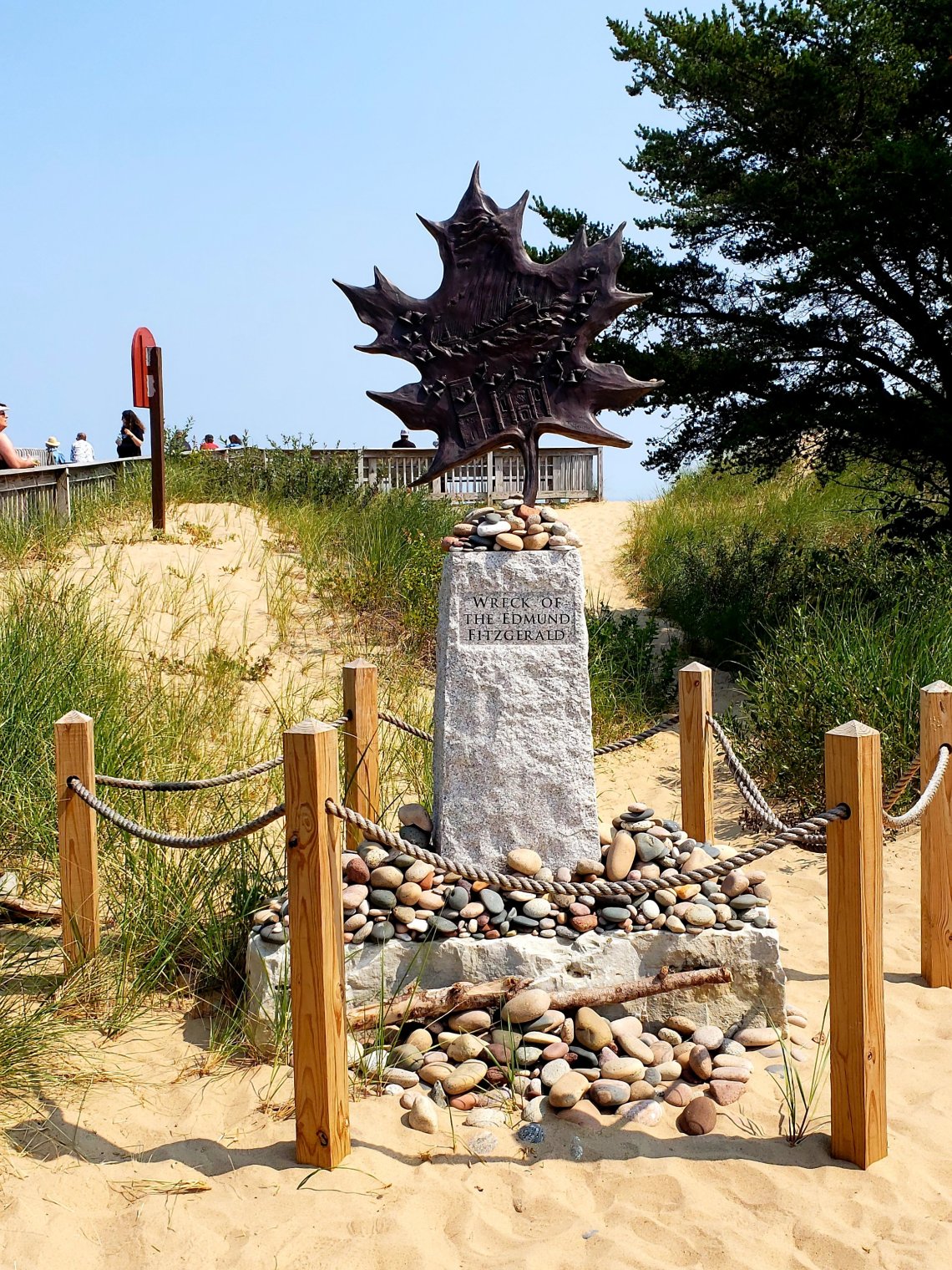 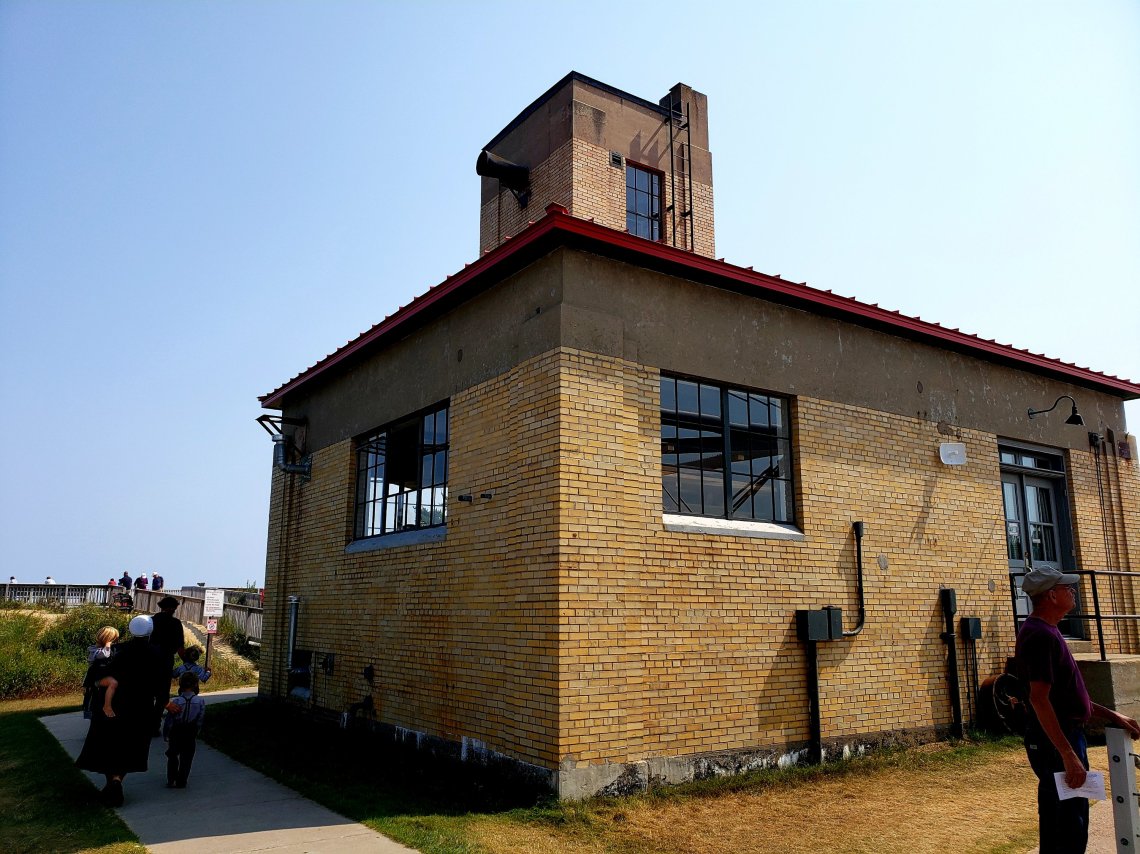 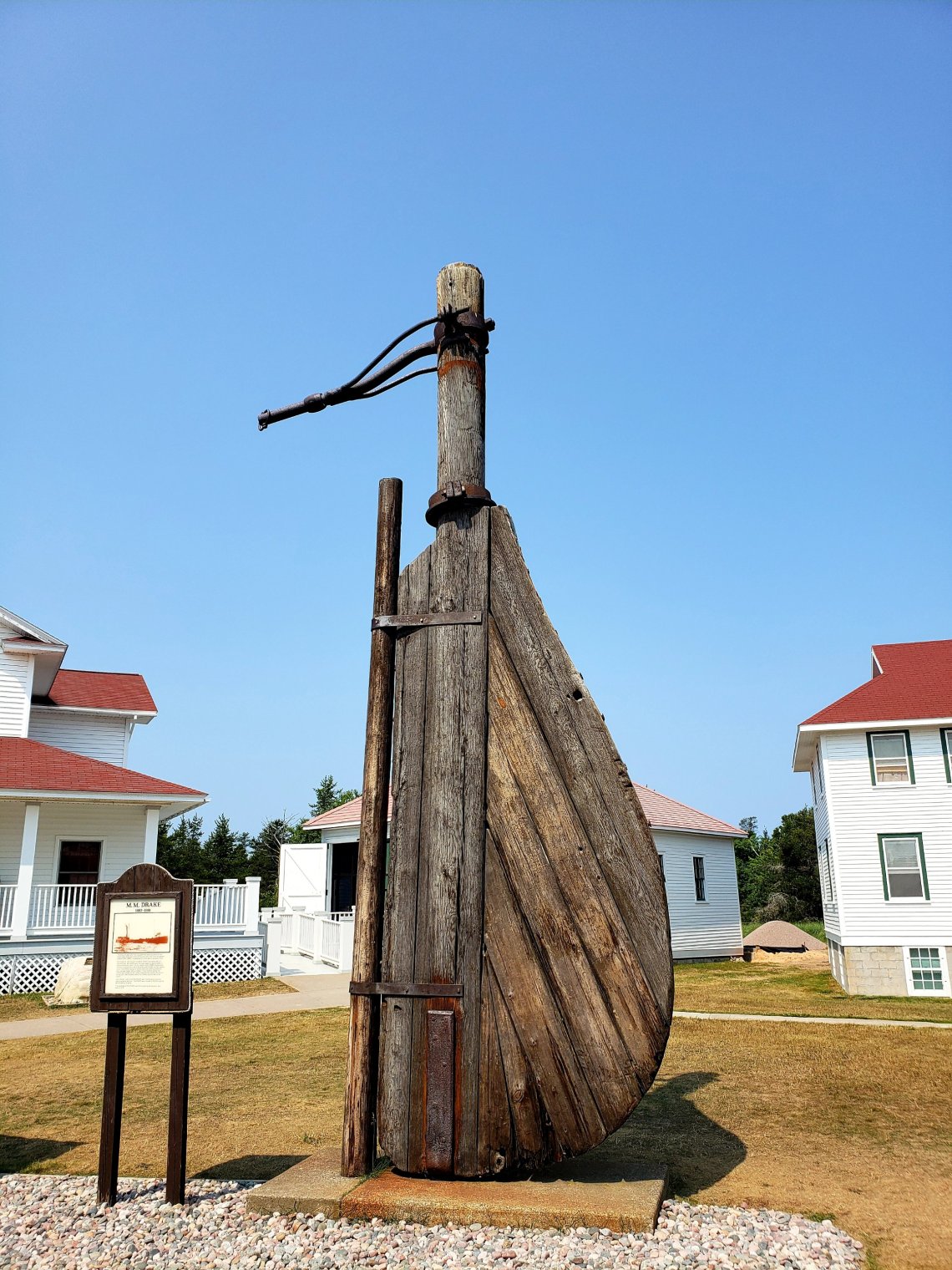 I walked the shores of the point. The smooth rocks line the beach along with the driftwood. 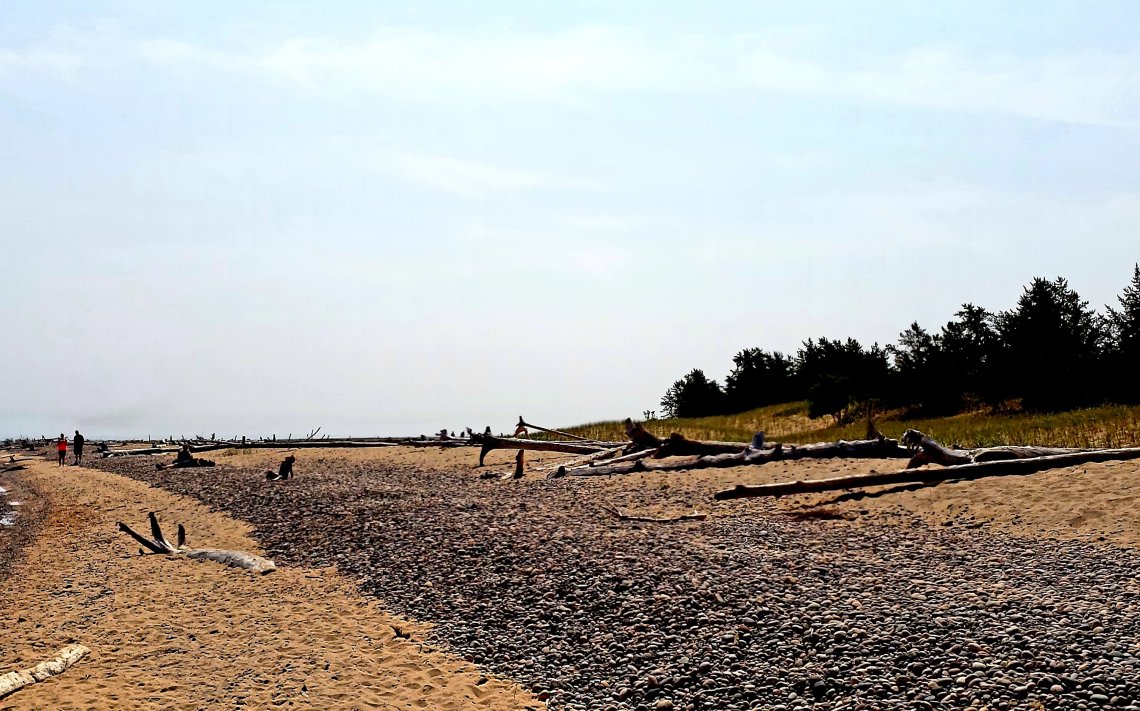 I drove south and turned on the highway that takes you to Tahquamenon Falls State Park. The park has a campground, hiking trails, 3 small lakes and the lower and upper waterfalls.

The waterfalls are part of the Tahquamenon River which empties into Tahquamenon Bay just south of Paridise.

The lower falls are split by an island. They had boats for rent so you could go out to the island. Many people took advantage of this as it gave them a chance to play in the water.

Here are the Lower Falls. 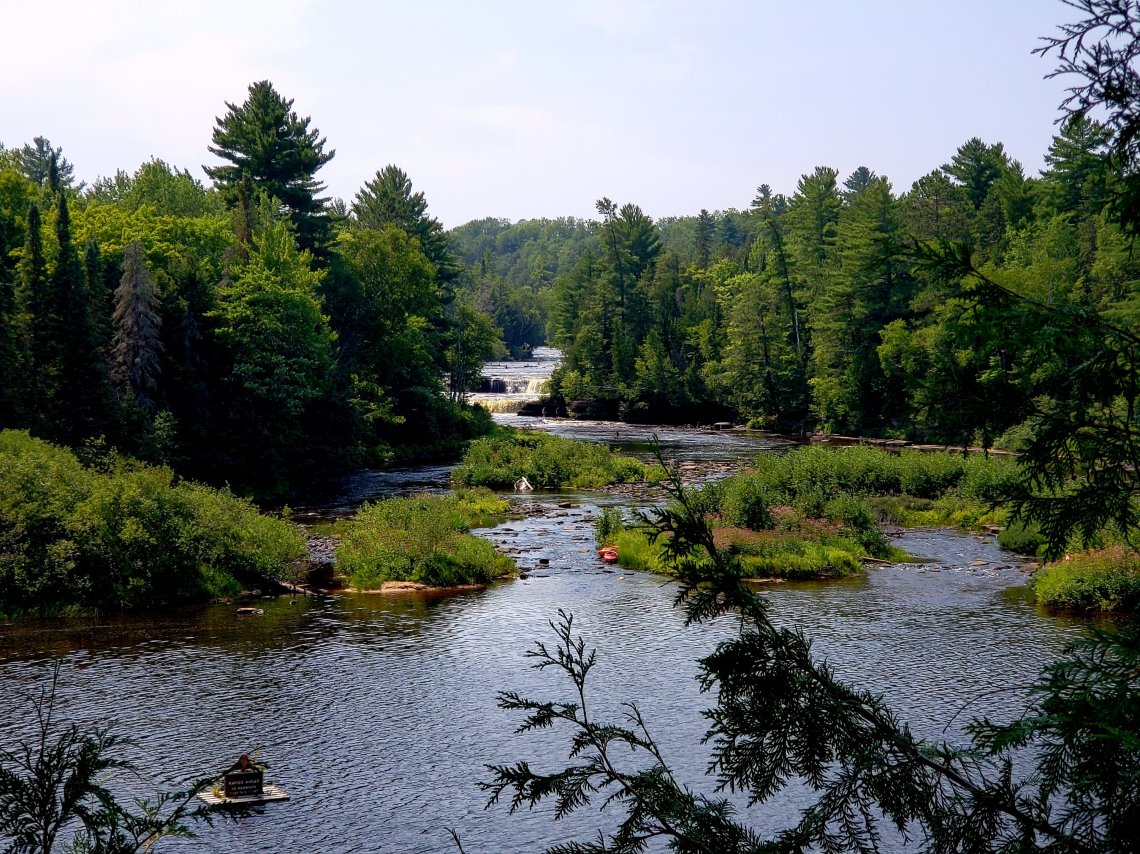 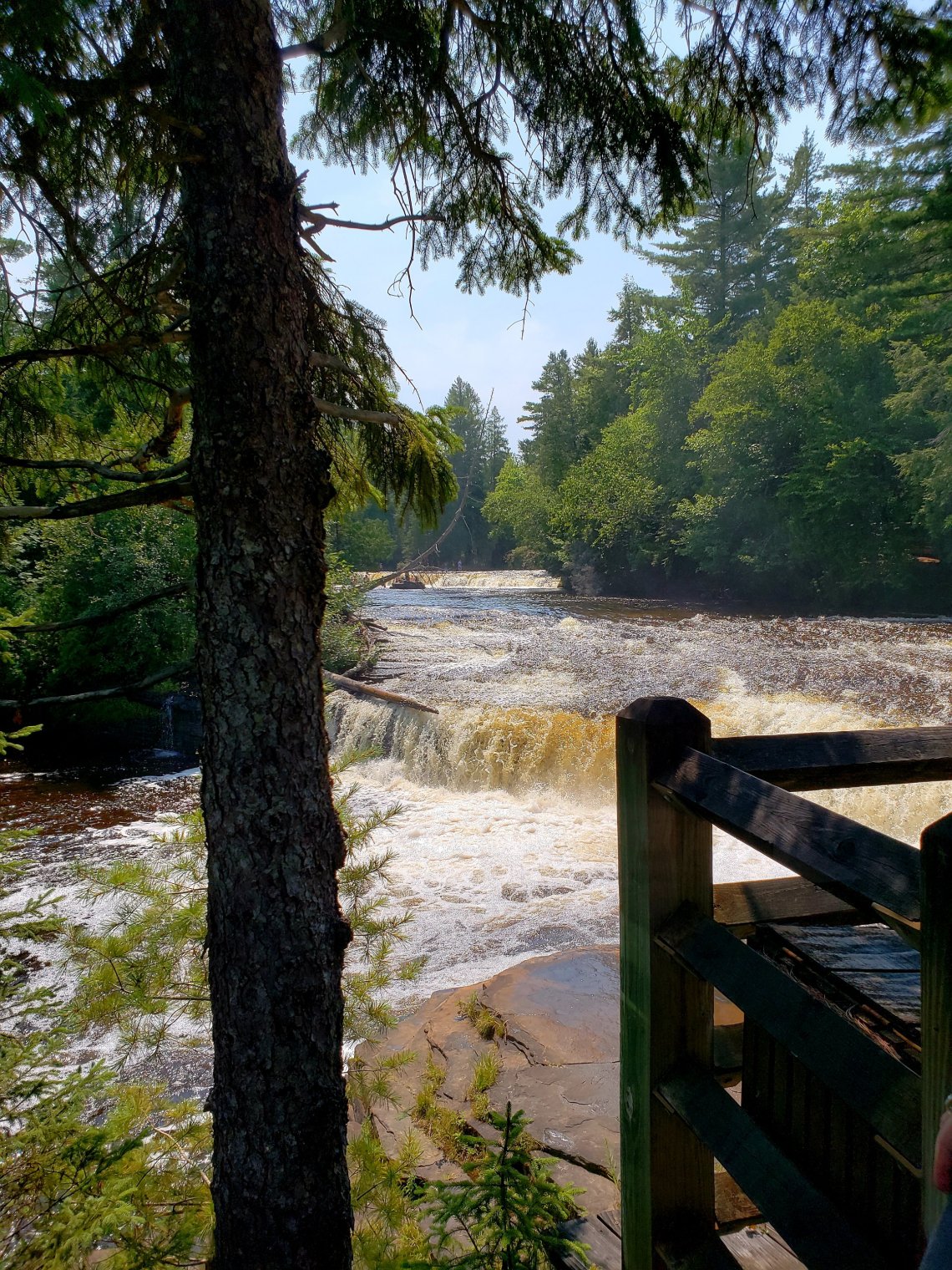 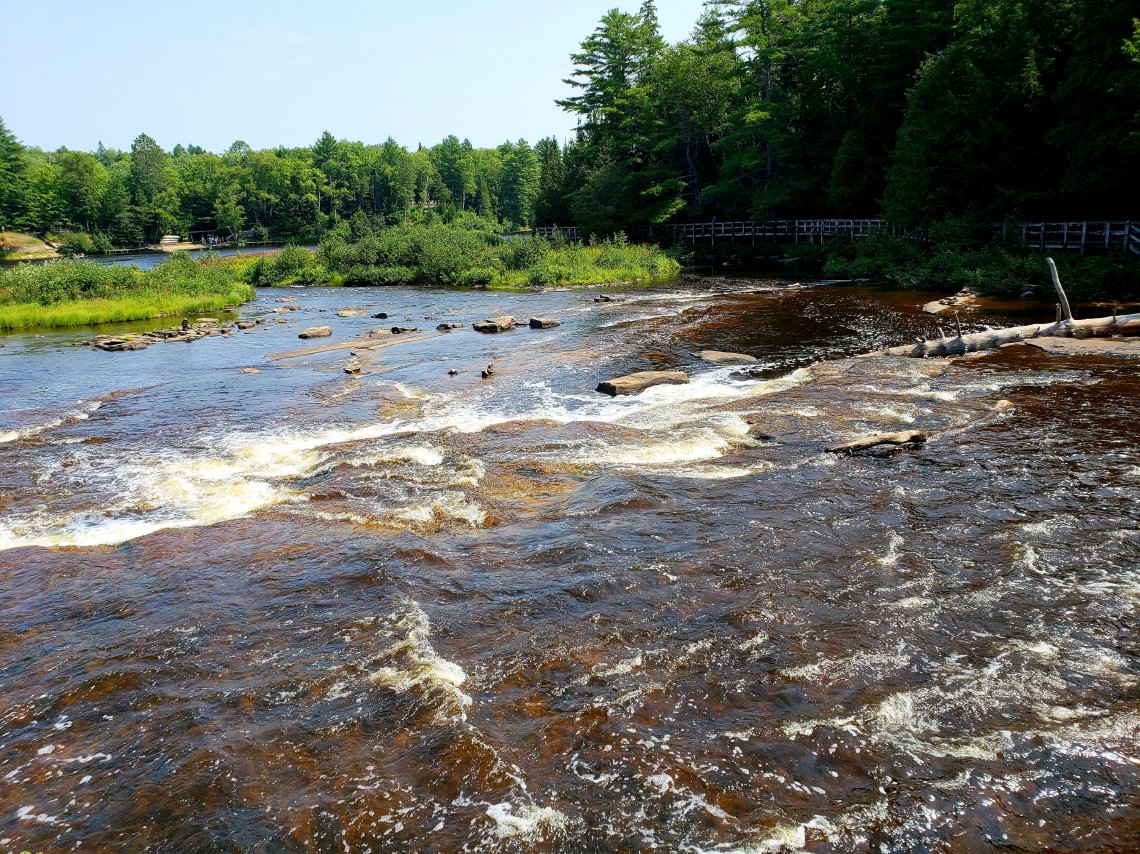 And the Upper Falls 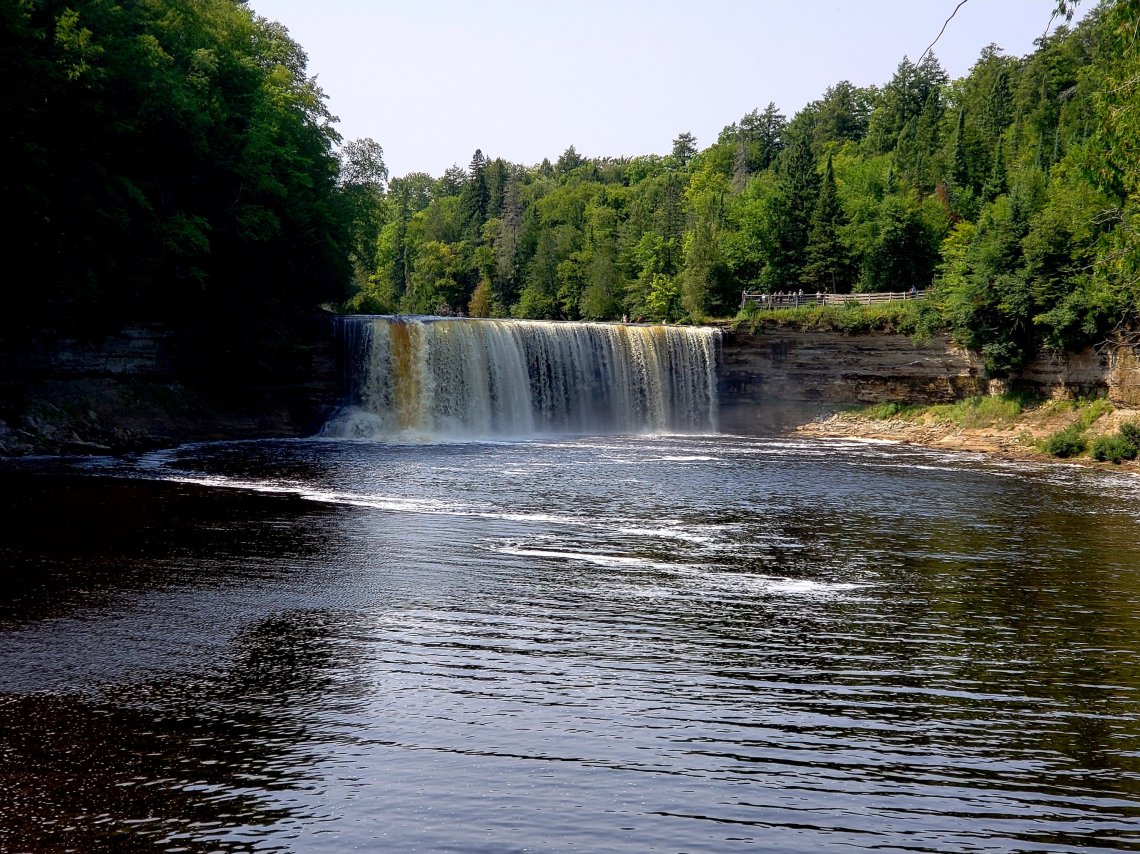 It was 116 steps down to the gorge to see the falls. I carried Harlie and Frannie down but they were great climbing back up! Here they are on a nature trail back to the parking lot. 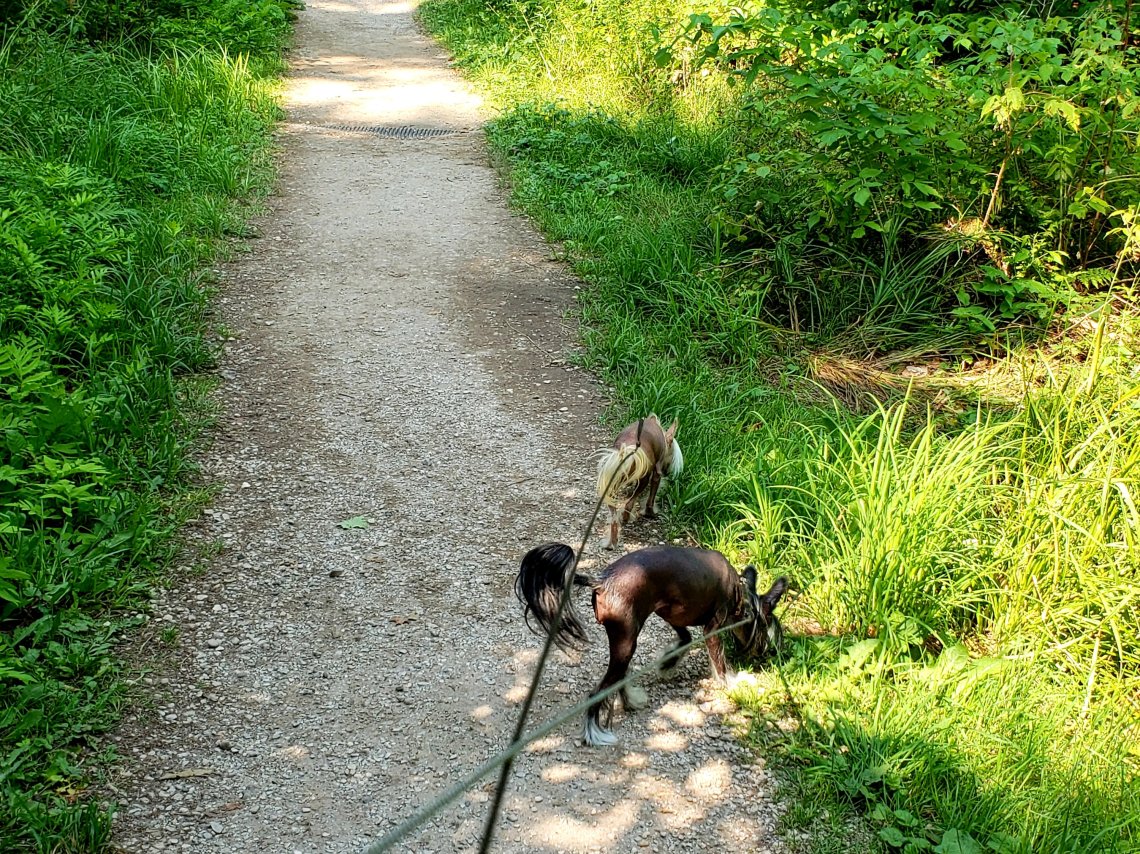 Officially, we are all pooped so it’s time to head back to camp. But wait! Did someone say coffee? And you know what coffee houses have besides coffee? Yay! WIFI !! So while I had the best frappuccino I have ever had, I got to upload my blog from yesterday.

The little Indian town of Bay Mills had two things that caught my eye. The first is this statue. In honor of the veterans who have served in the Indian community. They represent Past, Present and Future.

The other thing, and if anyone knows me well, they know I am intrigued by cemeterys. Well, I hope I didn’t break any spiritual laws and won’t be visited by angry spirits later, but I took pictures of an old Indian burial grounds. 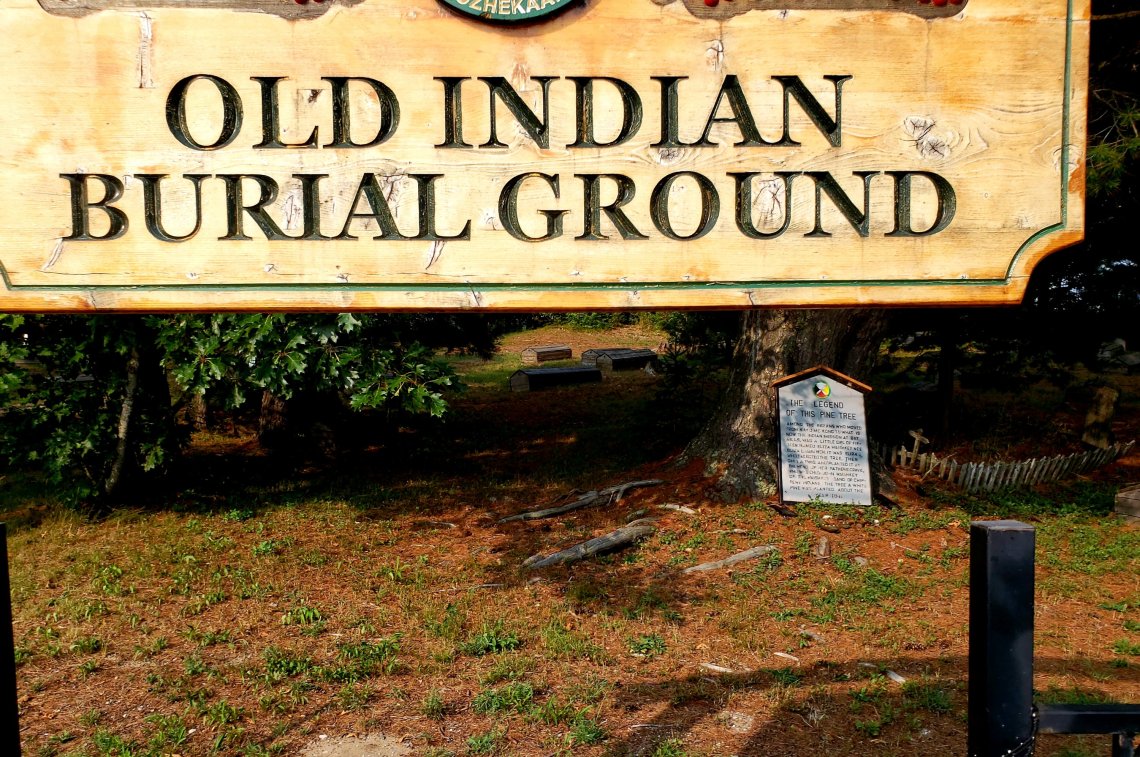 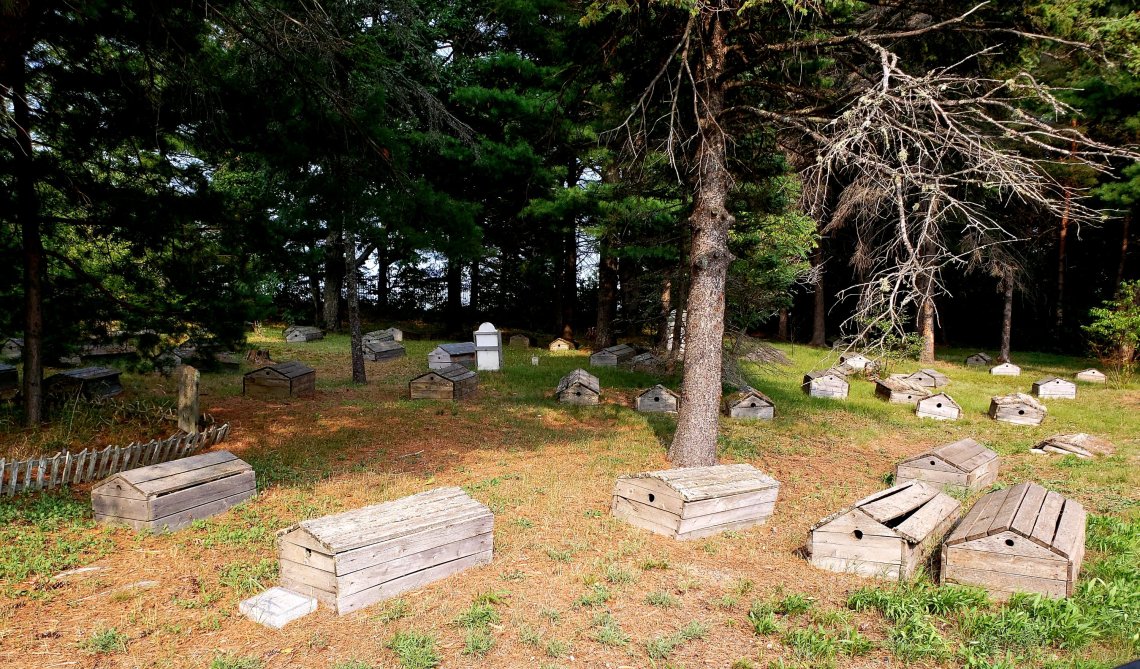 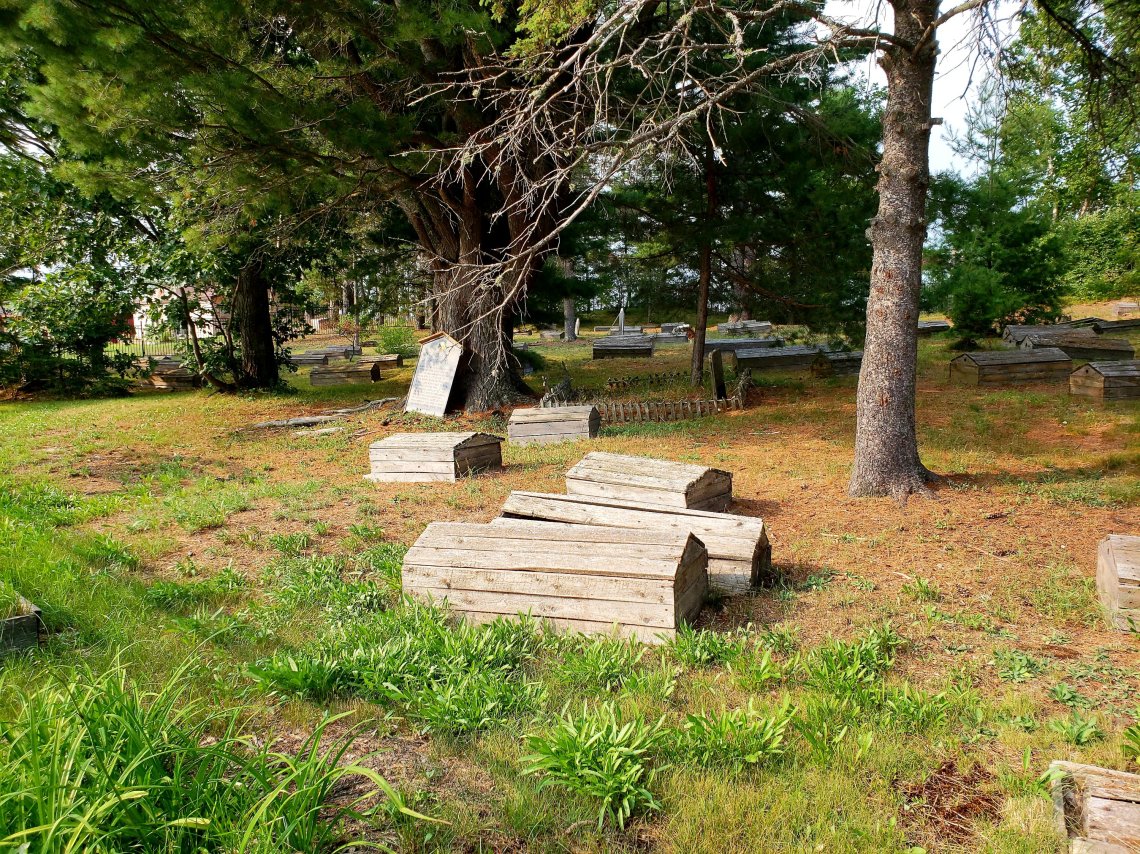 I didn’t see any sign saying I couldn’t so I did! I found it fascinating. Wish I could have gone in.

Good night to all.