I left Camp Verde early morning headed north on I-17 towards Flagstaff, Arizona. It was a beautiful drive up the mountain. Too bad I didn’t have a Starbucks in my hand.

As I head north out of Flagstaff towards Monument Valley through the Navajo Nation Indian Reservation, I have to say that, from what I have seen of the Reservations in Arizona our government gave these people the worst lands ever. The lands are not good for agriculture, livestock or industry of any type. They are barren, dirt and rocky. Just my observation and makes me feel like the government should be doing more.

The Navajo Nation as of this day had not re-opened and are strictly enforcing wearing masks. I had been told that the tribe had a meeting for re-opening but had decided to stay closed.

I already had my reservations for one night at Goulding’s Lodge and Campground, so I kept them.

Monument Valley unfortunately was closed but the campground had several hiking trails so I took advantage and went exploring. That is my camper in the middle of the top picture.

One of the trails had this amazing rock arch. 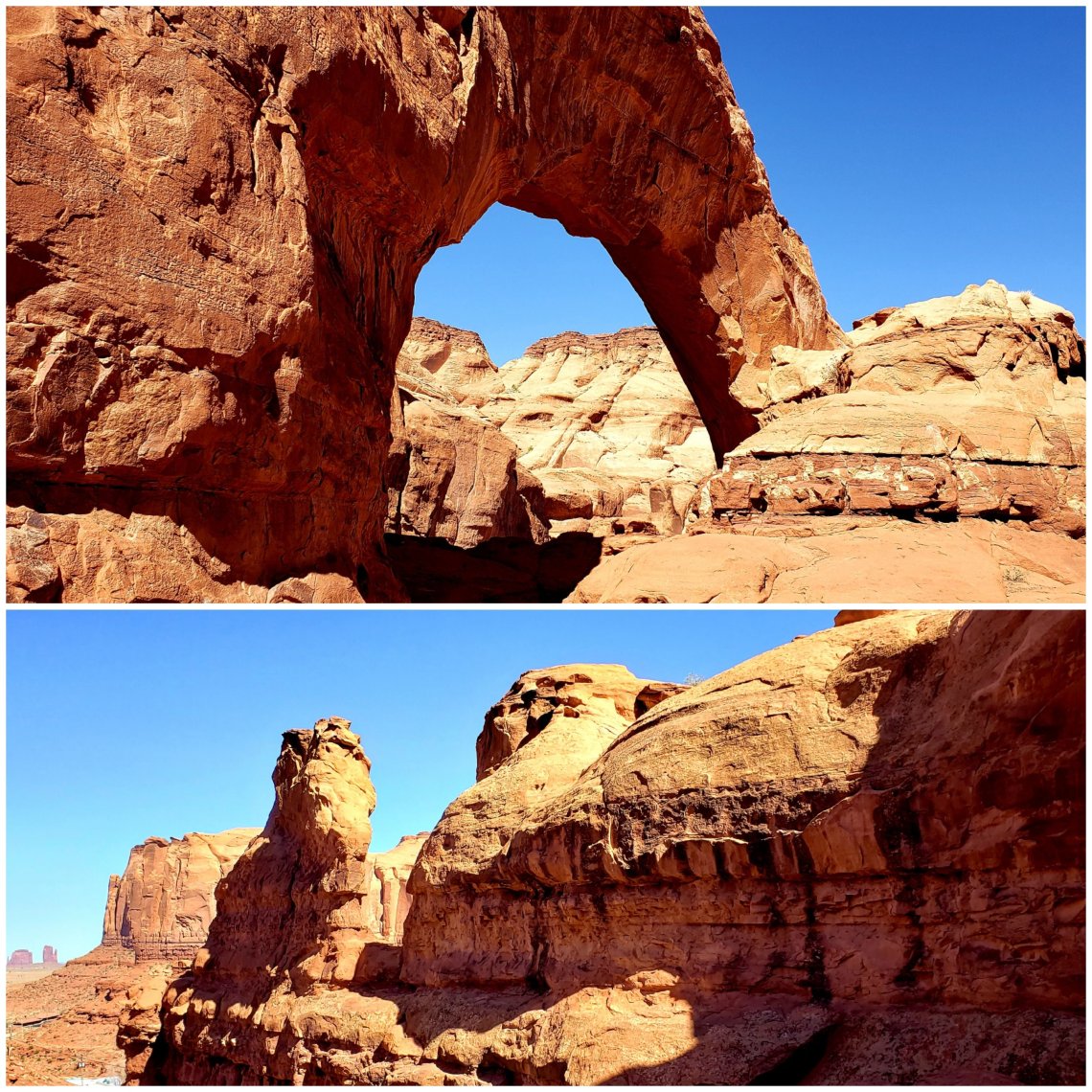 Here is another shot of the arch and a look out towards Monument Valley.

It’s astounding to me the way the winds and water have shaped the rock.

Ancestors of the Rocky Mountains these mesas, buttes and spires are mainly sandstone deposits.

The top picture is of a canyon next to the campground and lodge. 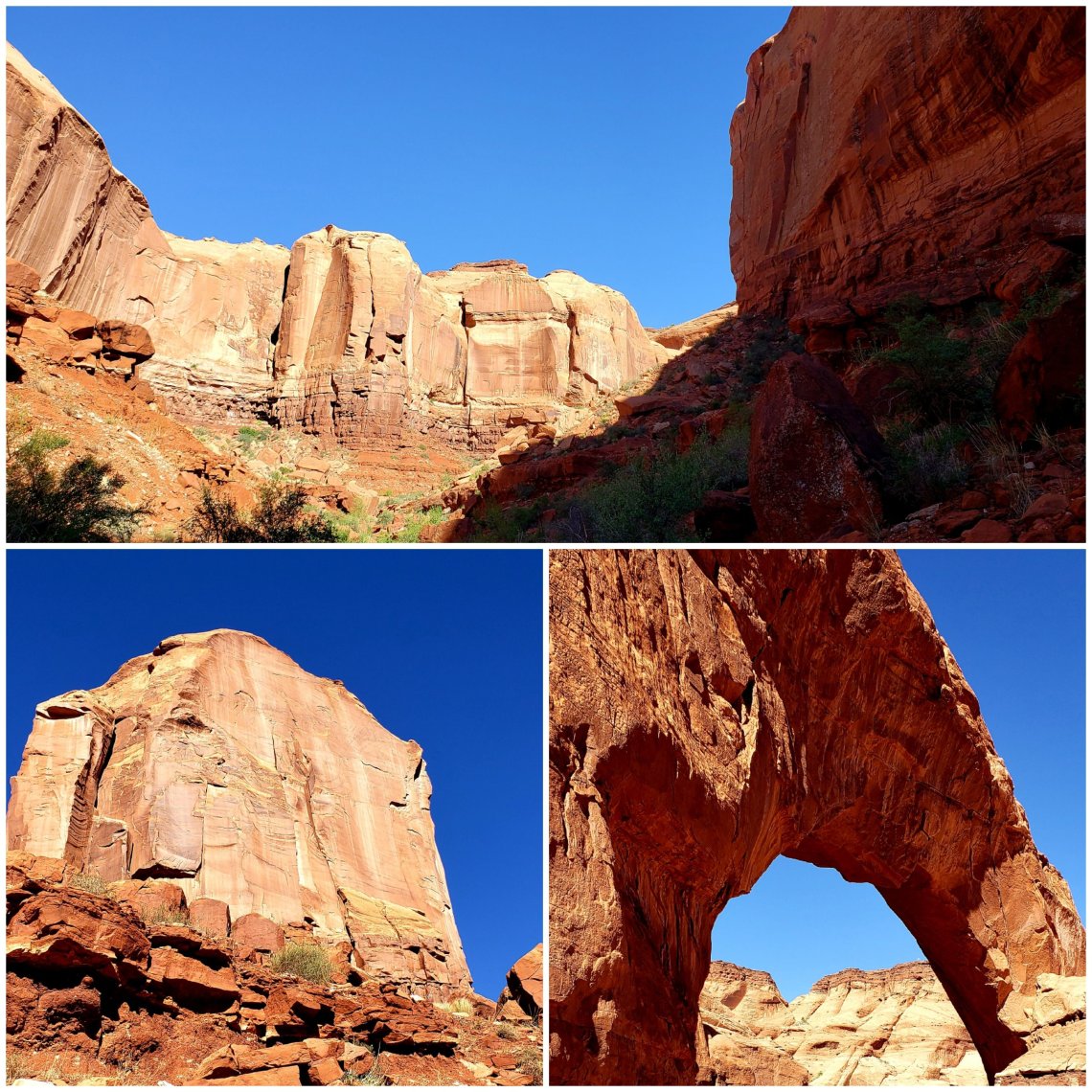 When I left in the morning I could see some of the formations out in Monument Valley.

The delicate spires are a wonderful sight. I really wish I could have taken the 17 mile driving tour on the over 91,000 acres of land

Monument Valley is actually in both Utah and Arizona.

Buttes and spires can be seen from the highway.

This is the edge of the Shonto Plateau at the top and the bottom is Agathla Peak outside of Kayenta. Arizona.

As I am driving northeast the topography seems as if I were driving through a small scale Grand Canyon.

Onward to my destination I passed Valley of the Gods a scenic sandstone valley outside of Mexican Hat, Utah.

Just outside of the village is its namesake in rock formation. Check out the different colors of stone in the background.!

OK here is my shoutout to all the seniors of 2020. Looks like I made it just in time for the parade on main street.

Four Corners is where Arizona, Utah, Colorado and New Mexico all join together. I made it to the entrance but it was closed also.

The bottom picture I got from google to show you what I would have seen if they were open.

I have reached my destination for the next few days. I am staying at the Ancient Cedars Mesa Verde Campground in Cortez, Colorado.

Top is the Guillet Mercantile Building, circa 1889; bottom left is the old Red Owl Supermarket, cicra 1960 and bottom right the E.R. Lamb Co., circa 1909

I had lunch at the Burger Boy. When was the last time you were served by a carhop? circa 1959

Driving around Cortez I found these really cool murals.

Down the road from Cortez is the little village of Mancos, founded in 1894.

What a beautiful place. 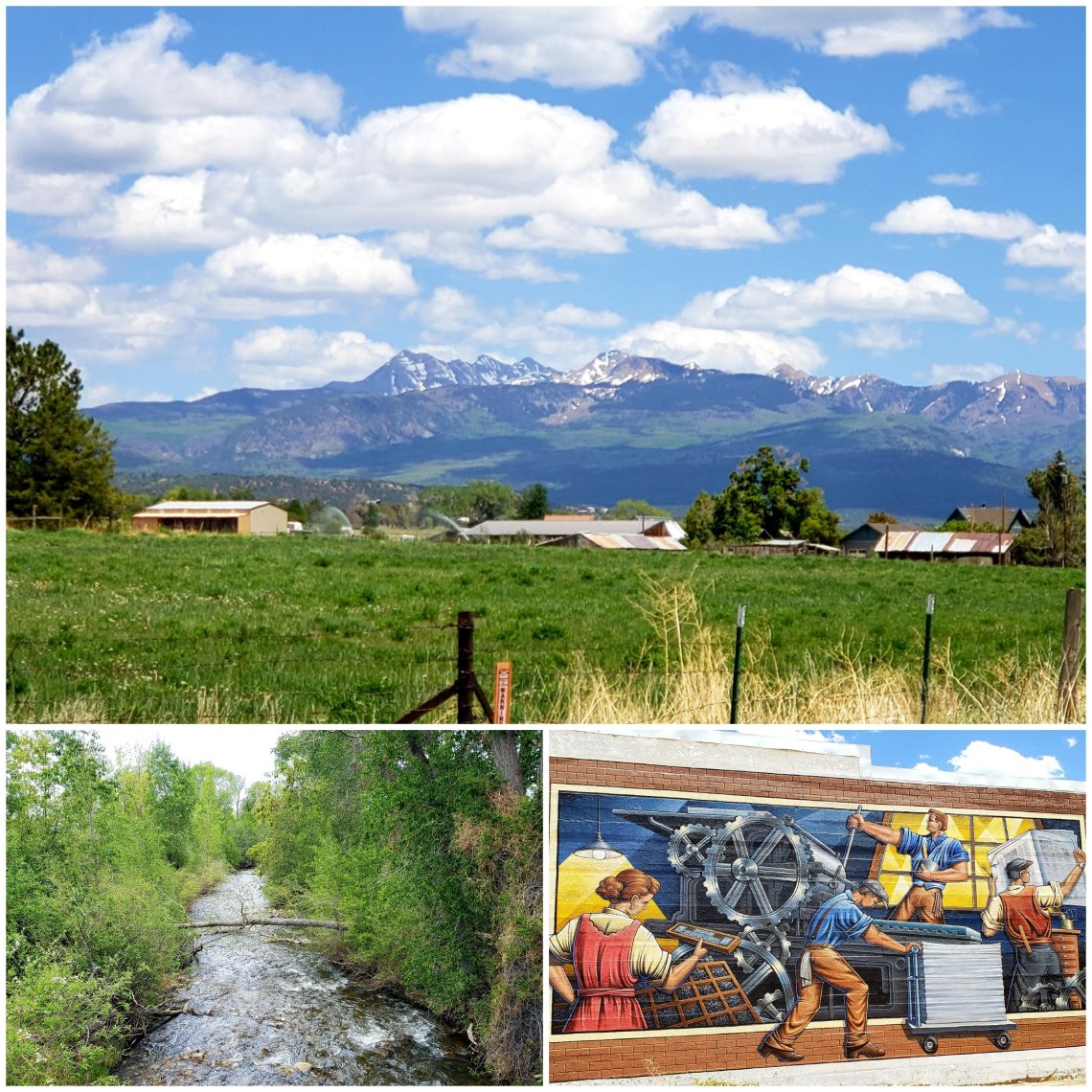 Dolores, Colorado sits next to the Dolores River in a valley of greenery and rock. It was founded in 1900 and replaced the town of Big Bend which now is under the McPhee Reservoir outside of town.

Top is the Dolores River, bottom left is The Livery, circa 1900 and bottom right is where the post office was, circa 1929 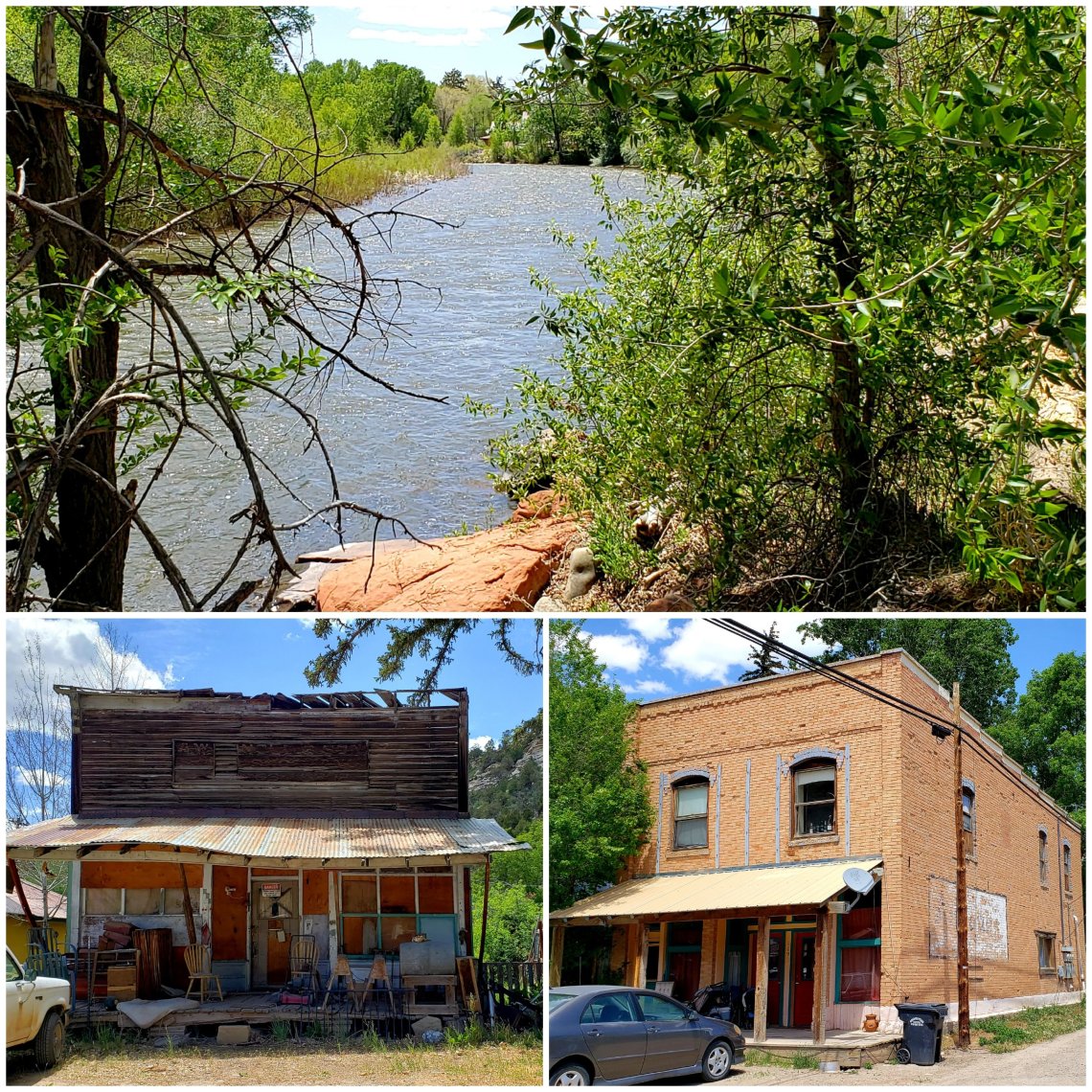 Discovered in the 1880’s and created in 1906 the Mesa Verde National Park preserves the architecture and heritage of the Pueblo people.

I was very grateful that the park has partially re-opened on the last day of my stay here.

The Visitor Center, tours and many of the hiking trails are still closed. So today is driving day only.

The trip is 20 miles roundtrip over the Colorado Plateau.

A lonely little flower in the parking lot.

Park Point is the highest point in Mesa Verde with an elevation of 8572 feet.

This is also where the fire lockout tower is located.

Here you can view the different layers of shale and sandstone.

The Cafe and Gift Shop were open but the lodge was not.

Remnants of wildfires were a common sight throughout the park.

The largest and most famous cliff dwelling in Mesa Verde has over 150 rooms and 20 kivas.

House of Many Windows

This 11 room, 1 kiva dwelling sits on a 10 foot ledge and the windows are actually doors. 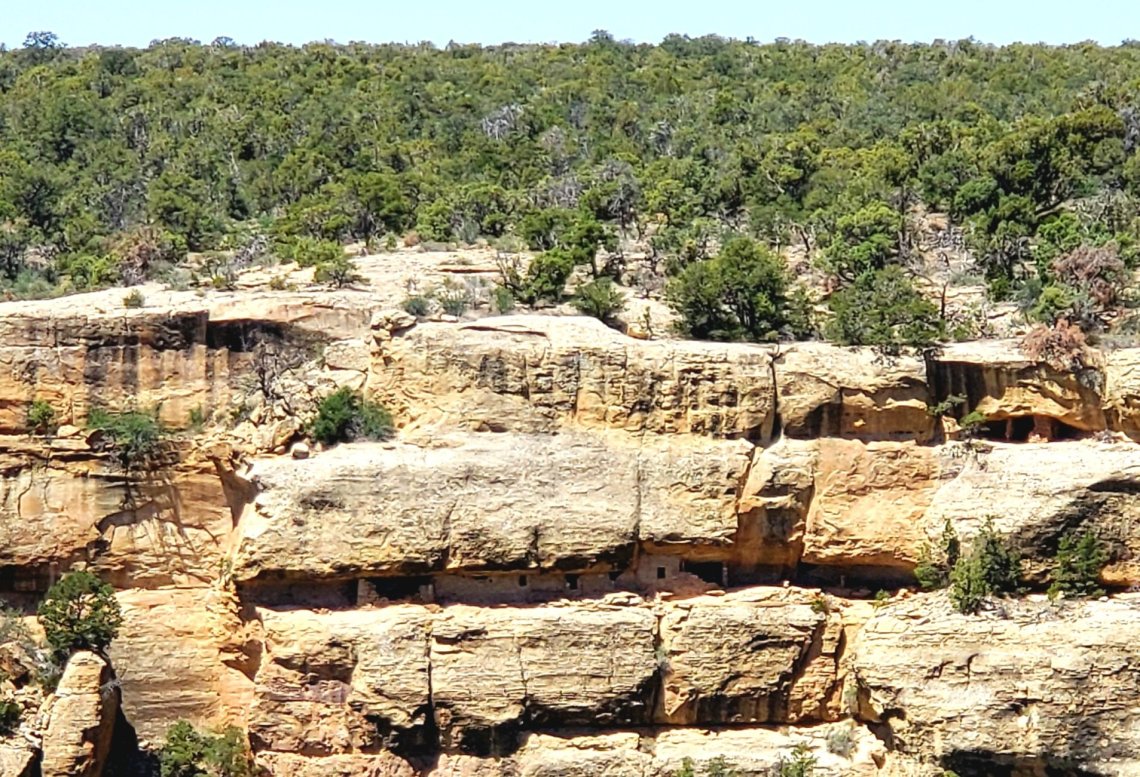 Built in the 1200’s, Square Tower House is a three-story house and the tallest in Mesa Verde.

Preserved under out door buildings, here are a few pictures of one of the places I stopped along my drive.

At the overlook you can actually see two cliff dwellings.

Top picture is a panoramic of both. The middle is the Cliff Palace. The bottom is the Sunset House.

Believed to a ceremonial complex, this 800 year old site sits on top of the mesa across from the Cliff Palace cliff dwelling . 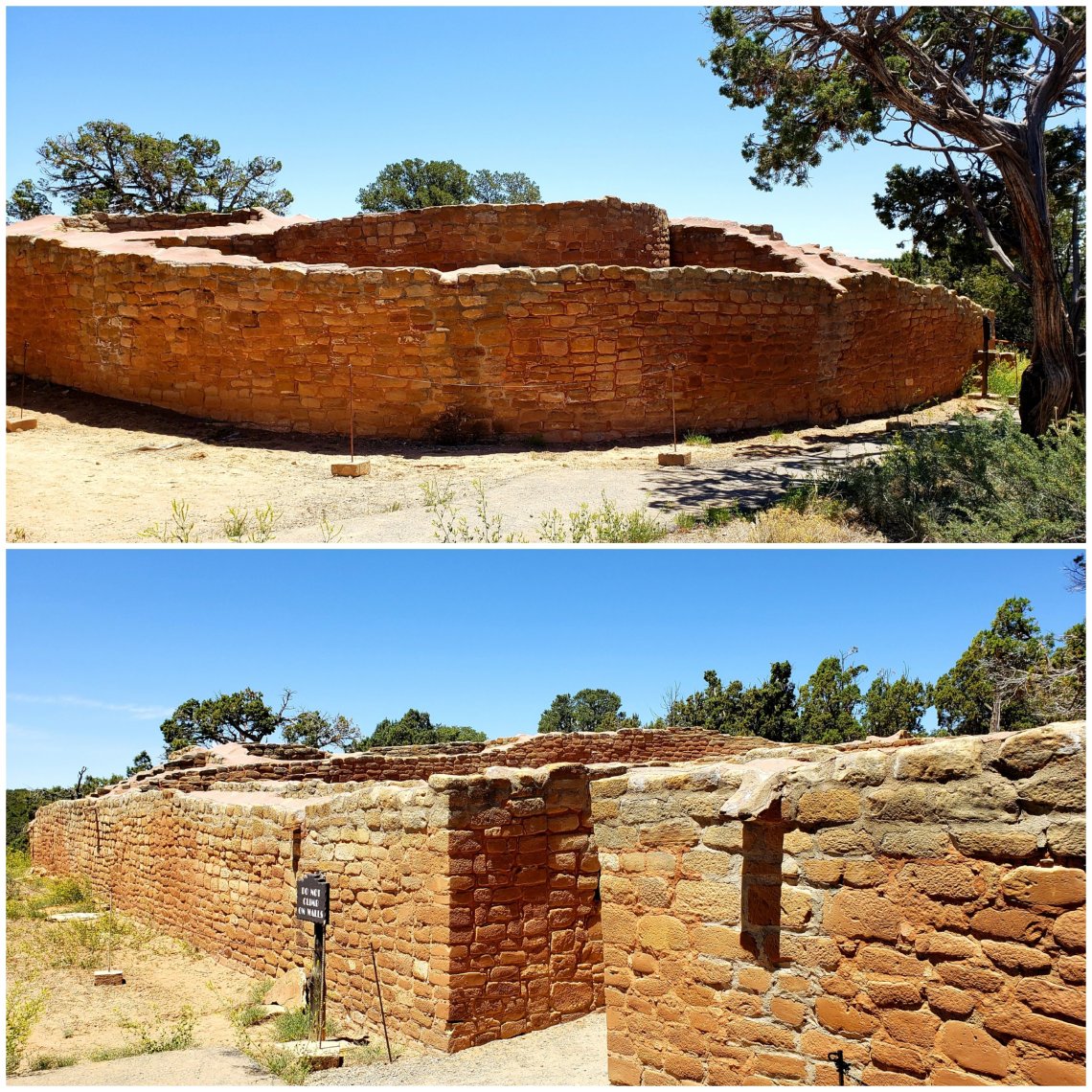 This is the third largest cliff dwelling in Mesa Verde, with 130 rooms and 8 kivas.

Yucca plants were in bloom all over the mesa. A night bloomer it attracts a species called pronuba moths.

I have seen a lot of interesting places and covered a lot of territory this past week and have enjoyed every minute of it and hope you did too!

I am off to Moab, Utah for a week of exploring with my good friend Tracy.

Be safe, be healthy and I will too!