The excitement grows as we drive through Pensacola and across the bridge on the Pensacola Bay that takes us to Gulf Breeze and then across the Santa Rosa Sound onto the National Seashore. As we enter Gulf Islands National Seashore and make our way to Fort Pickens, you lose the remnants of city life and enter the seclusion of Fort Pickens. The beaches are covered in snow white sand, the water is an amazing blue green and the silence is golden.

In 1971 the National Seashore was established by Congress to protect the barrier islands, the wildlife, salt marshes, historical structures and the archeological sites along the Gulf of Mexico.

We are staying eight days at Fort Pickens. This amazing campground has cement slabs for rvs and campers, electric and water. There are fire rings and picnic tables at each site, several restrooms and showers, a dish cleaning station and a laundry. There is a dump station as you leave the campground.

There is so much to explore on the island. There is Fort Pickens, which offers guided or self guided tours. I will take you on one in a moment but wanted to talk about the forts history for a moment.

After the War of 1812, Congress developed a system to defend the country by building forts from Maine to Florida. Construction of Fort Pickens began in 1829 and was finished in 1834. Built by the US Army to protect the US Navy Yard in Pensacola Bay. Appointed to supervise the building of Fort Pickens was Captain William Henry Chase.

Fort Pickens is a five sided fort with a bastion at each corner. The counterscarp or the outer wall protected the side of the fort facing the island. The walls of the Fort enclosed a parade ground covering seven acres. There are over 21.5 million bricks that make up Fort Pickens.

The efforts by the Confederates to take over the Union fort were unsuccessful during the Civil War.

At one point the fort served as a prison for a group of Native American Apache Indians, including Geronimo himself.

Today the history of Fort Pickens is alive in the walls and surrounding batteries. You can read more on the history at this link; https://en.m.wikipedia.org/wiki/Fort_Pickens

After a fifteen Minute video at the discovery center we were ready to explore the remains of Fort Pickens.

The main entrance to the Fort was once secured with heavy doors, this is called the Sally Port.

Casements are these arched rooms that provided protected artillery positions and the foundation for the barbette. Traverse stones and the granite semicircles in the floor allowed cannons to roll left and right. Slots under the embrasures or the windows locked gun carriages into the wall providing a pivot point. Vents over the embrasures allowed smoke to escape.

The mine battery room was an area converted for electric batteries that powered a minefield across the channel. The minefield was deployed during the Spanish-American war and remained in use until 1926.

The mine chambers is a tunnel system that has three chambers each designed to hold a 1027 pounds of gunpowder. If the Fort was breached, defenders could blow up the chambers as a last resort. Collapsing the walls on the enemy.

This is the entrance to bastion A, it was once ten feet above the ground surface that you see here. There used to be a very deep ditch or a moat around the Fort and it was filled in around 1915. Attackers who reached the ditch would be caught in a terrible cross fire from the counterscarp to the main wall.

The postern, door in the corner, was used by soldiers as a doorway in peace times.

Battery Pensacola tunnel allowed access to the south side of the fort. When we entered to check it out it was sealed.

Cisterns were designed to collect rain water from the upper level of the Fort for drinking.

Here is a cannon on the top of a tower bastion.

Battery Pensacola was built to defend against new technologies. It is built of steel, powered by steam and was an essential part of Fort Pickens until 1933. 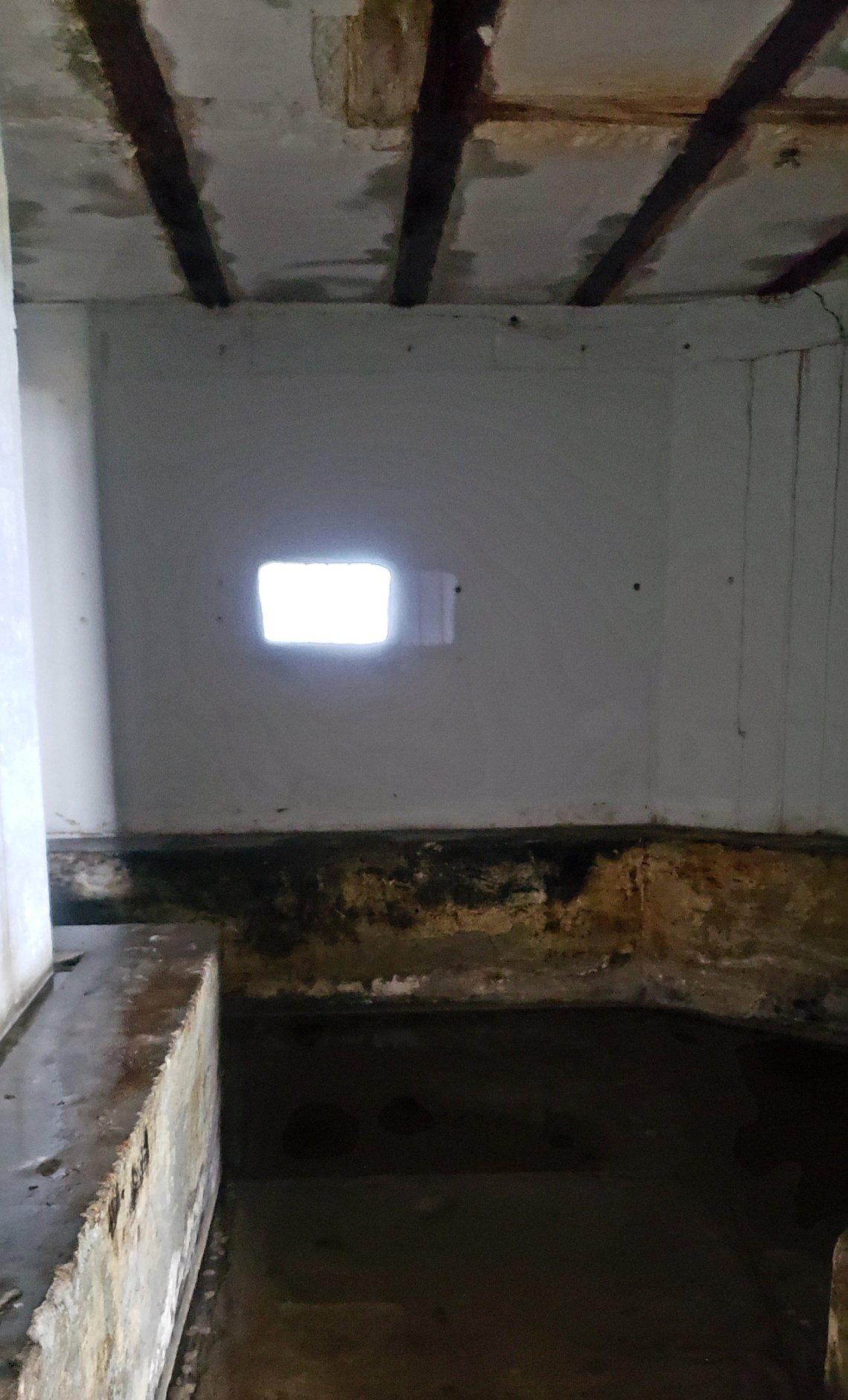 In 1899, Bastion D was destroyed when there was a fire that reached 8,000 pounds of explosives in the magazine there. Debris was thrown all the way across the bay.

After a 118 years of service Fort Pickens served as a Union bastion deep in the Confederacy, as a prison for confederates and later Apaches. In 1950 the coastal artillery would be disband.

1972 the fort became part of Gulf Islands National Seashore. In 1976 they invested a half million dollars in stabilizing and cleaning the old Fort restoring it to what it is today and making it safe for visitors. Battery Pensacola was restored in 1985.

There are 9 Battery’s that surround Fort Pickens. Easy walks or drives to each. 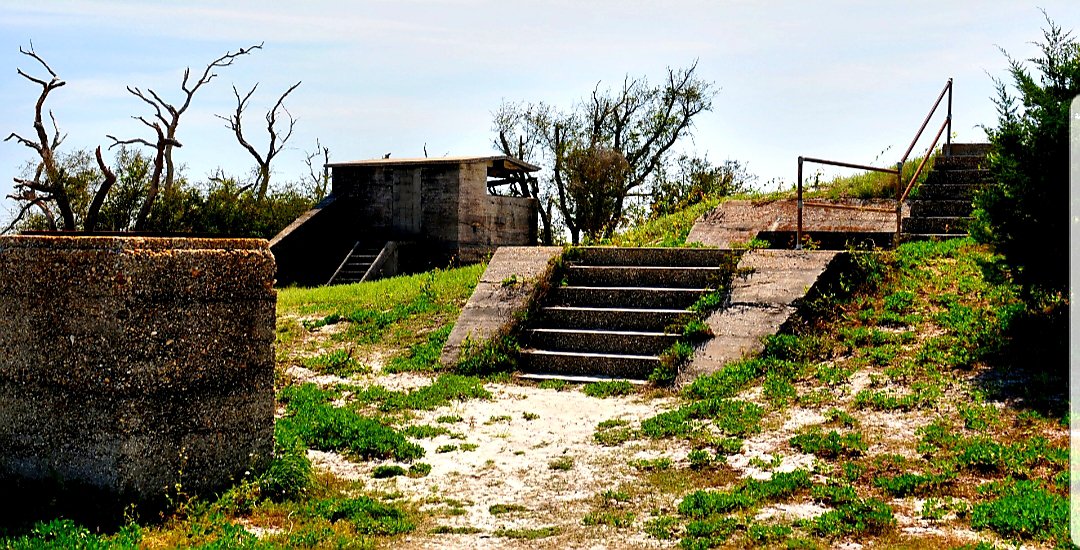 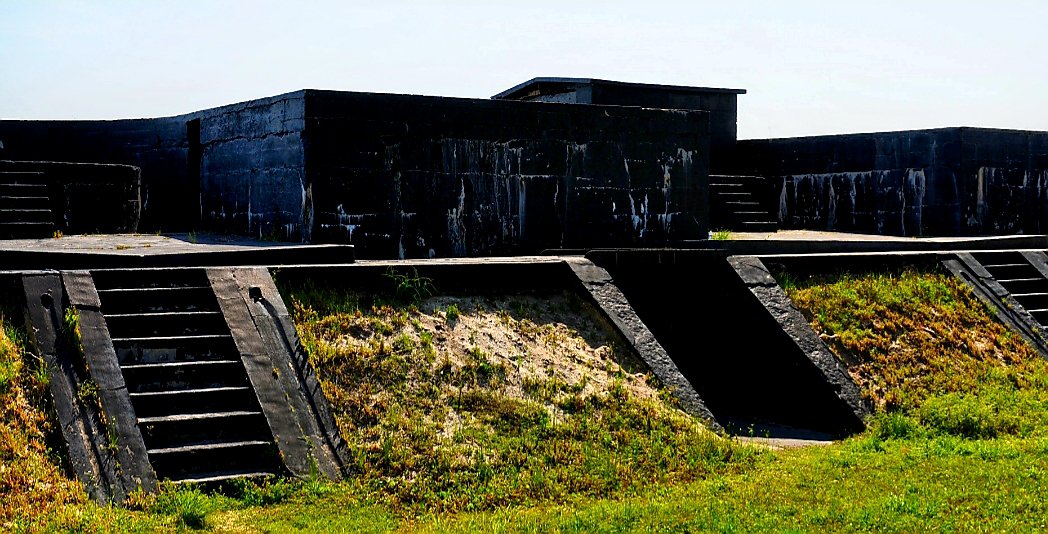 Battery Pensacola inside the Fort

We did a lot of walking on Fort Pickens finding new and interesting things along the way. There is even a Cemetery where the Chase family are laid to rest.

The sunsets here were amazing and peaceful. Here are a few of my favorites. 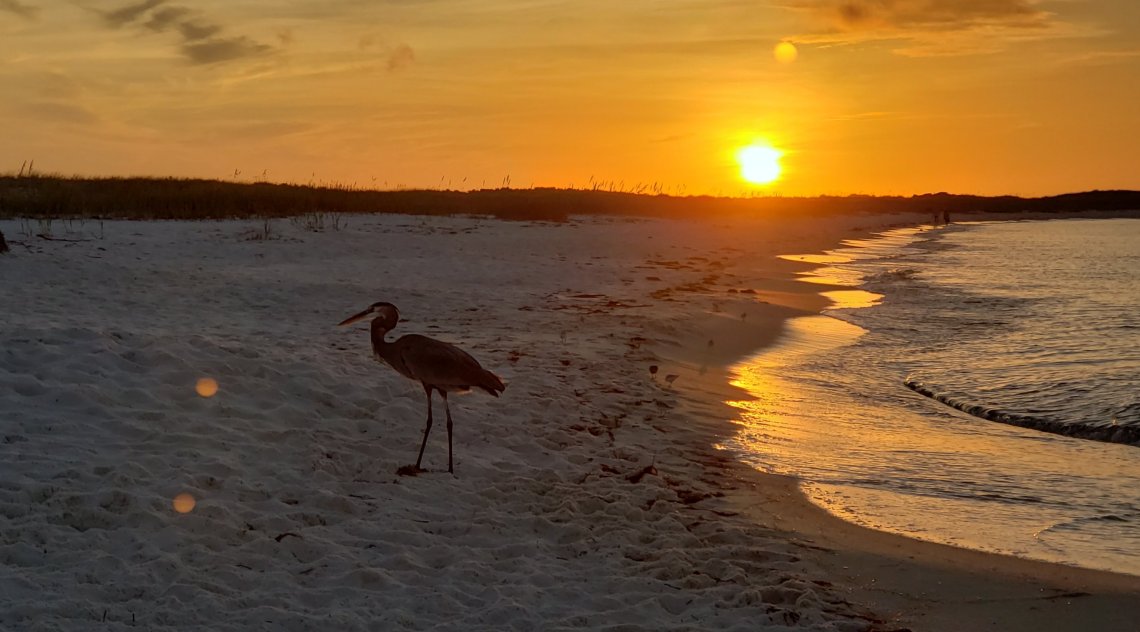 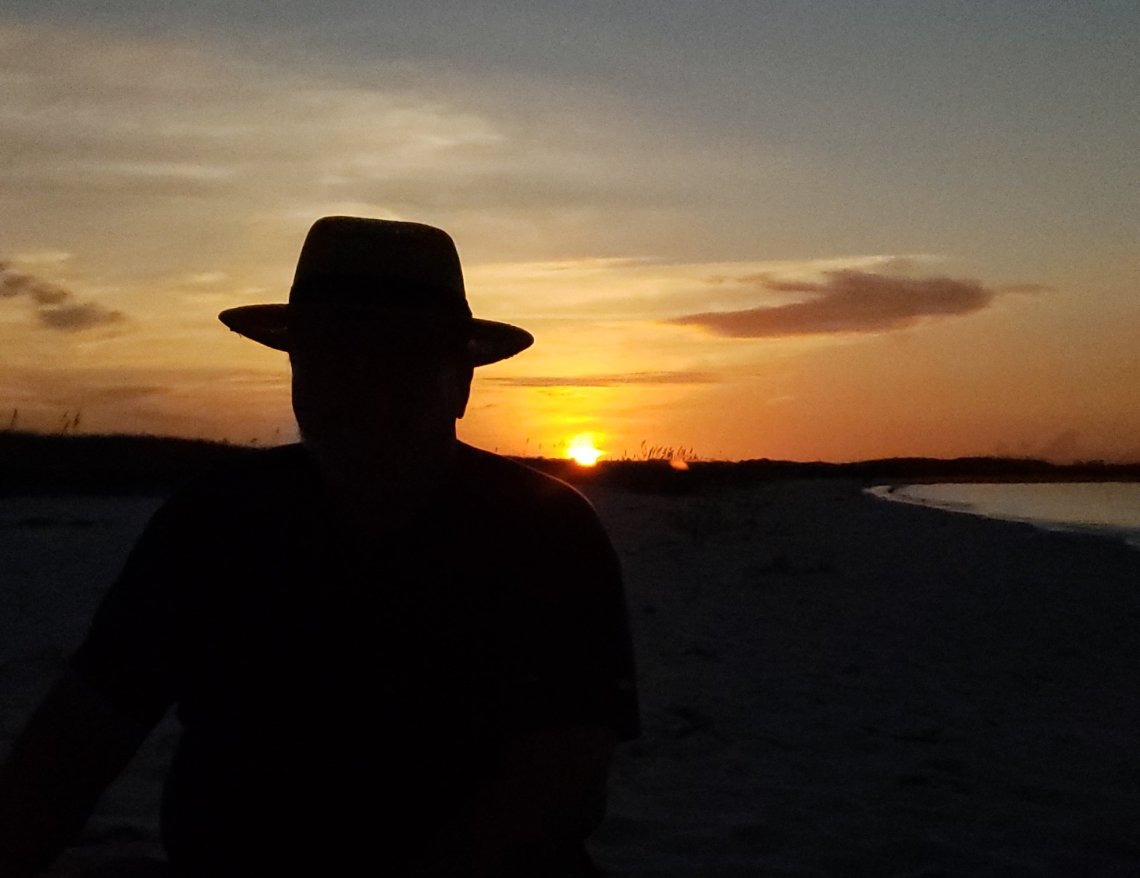 The beach was always inviting. You just can’t get enough of the beauty of this place. 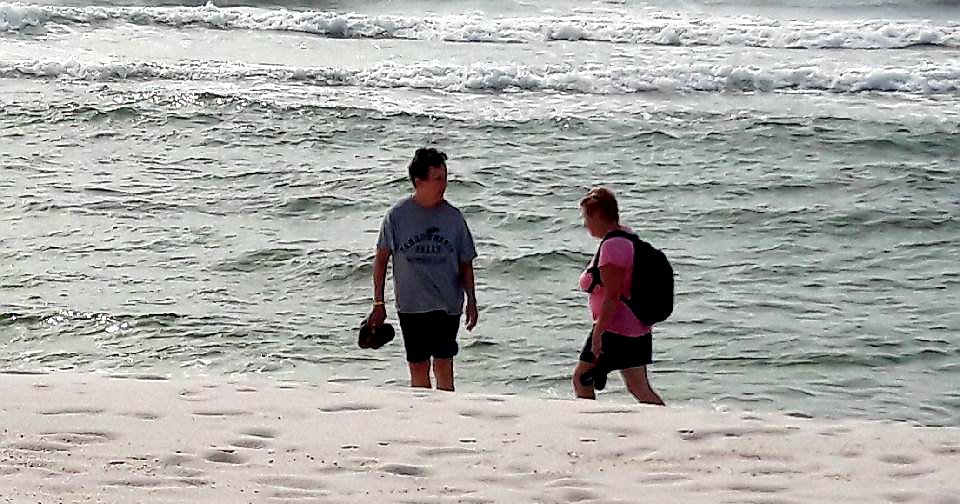 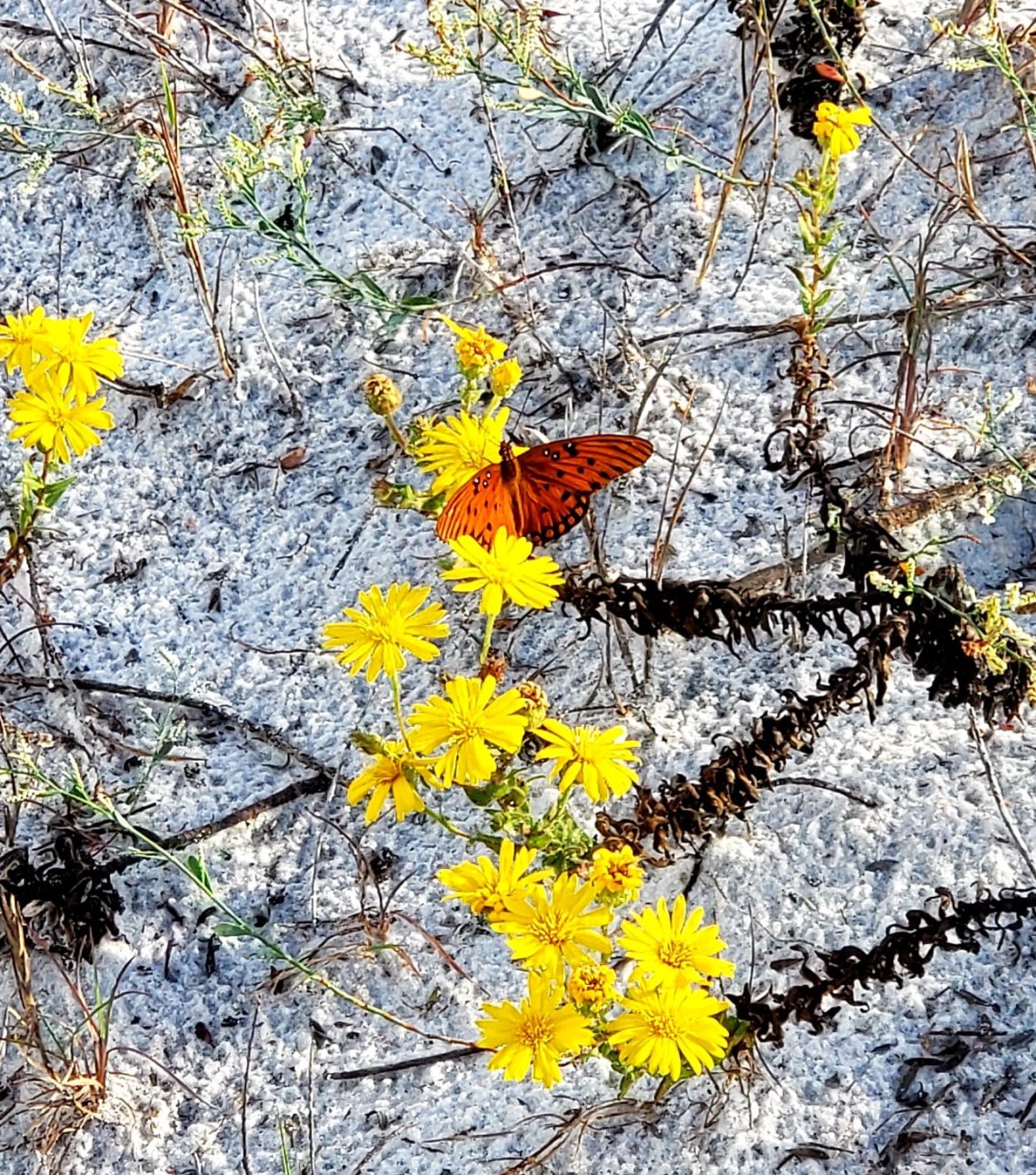 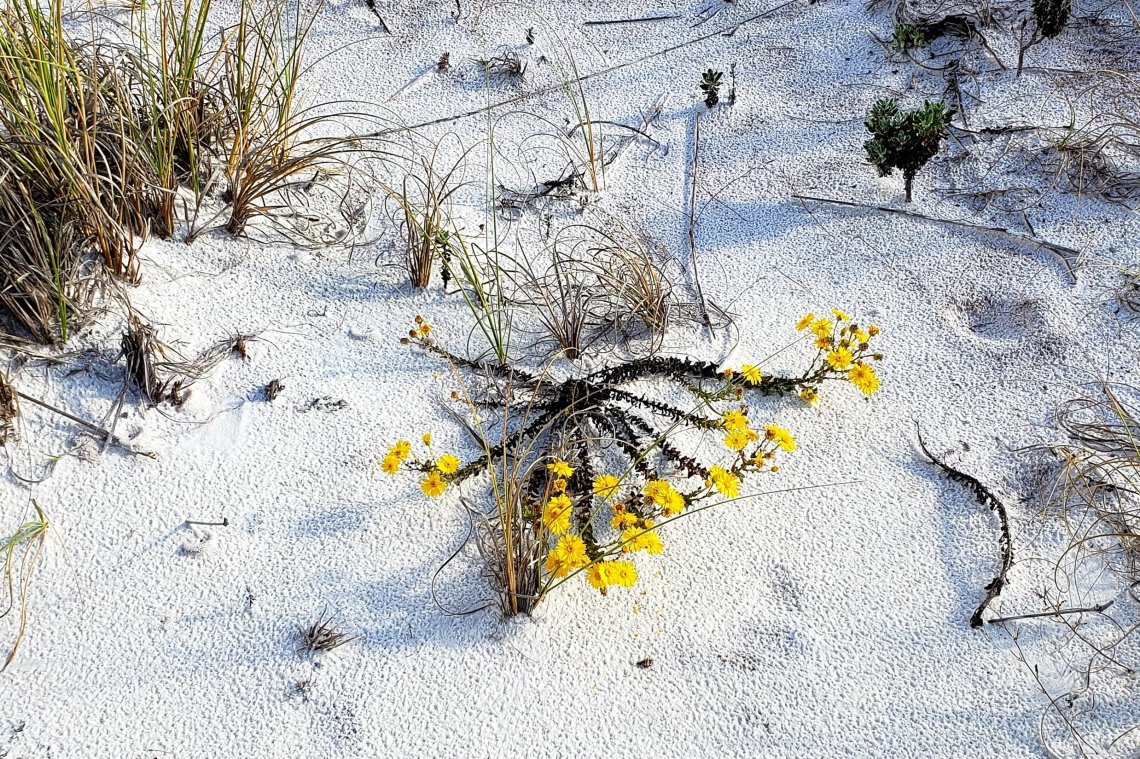 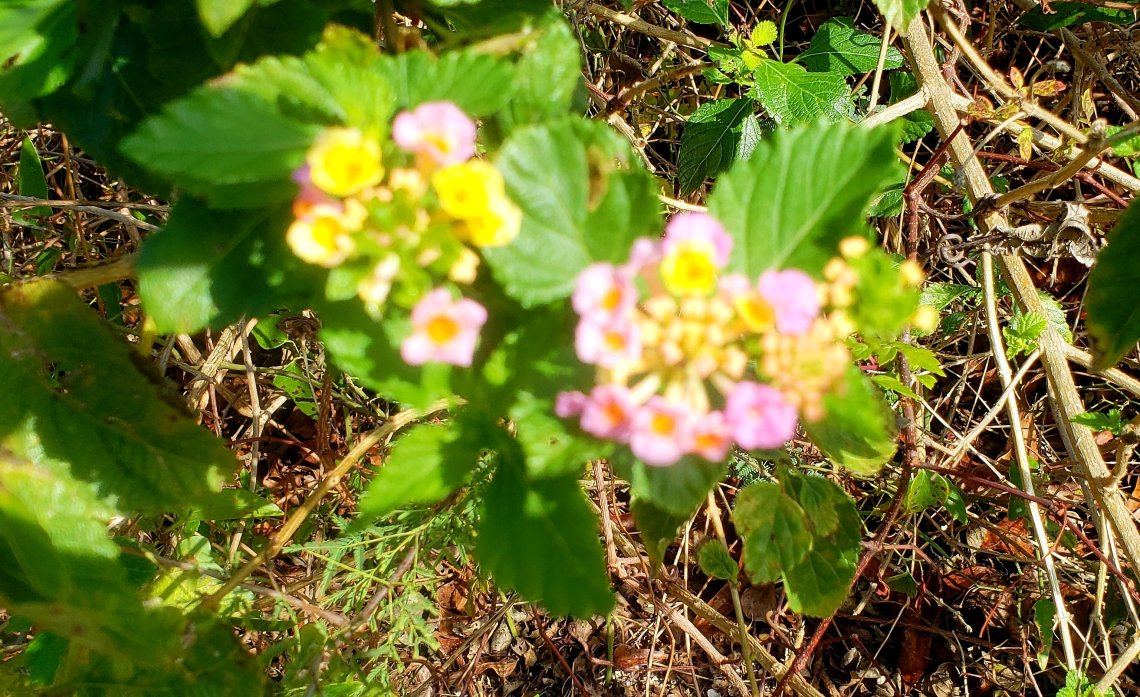 I even found a sand dollar!

There are many things to do outside of the serenity of Fort Pickens. Pensacola Beach is close by with all the seafood places to eat and the souvenirs shops to explore. One afternoon we ate at Shaggys. The food was ok, the atmosphere good and the service was great.

We don’t eat out often. Each of us cooks a meal once a week for the other two.

The local fish markets are a treat if you like fresh seafood. Tracy and John enjoyed Joe Patti’s. They both bought fresh salmon and royal reds. Tracy also bought fresh grouper. This place had desserts, cheeses, drinks, sauces, spices and everything fishy in between!

When we were at the pier at Fort Pickens you could see the Pensacola Lighthouse on the other side of the bay. We made a trip to visit the beautiful lighthouse but the trip soon became quite the ordeal. What should have been a forty-five minute trip quickly turned into nearly a two hour trip.

We used Google to find the best way to the lighthouse and soon found ourselves at the front gate of the naval base. The guard at the gate quickly gave us instructions to turn us around to go a different way and enter the Fort from a gate for civiians. 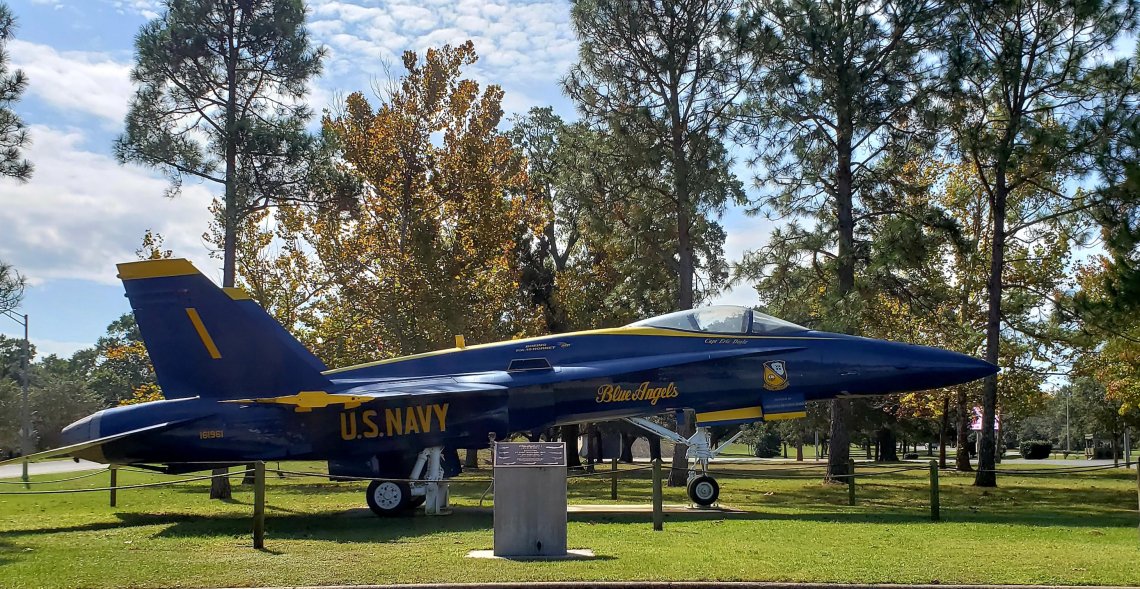 With the civilian gate in sight and identifications in hand we drove up to the gate. The guard at the gate took our IDs and then asked us if we had any fire arms with us. Well, one of us did. So the guard politely turned us around and pointed us in the direction of a gun shop that would hold the gun for us until we returned from the lighthouse.

Once we dropped off the gun and headed back towards the gate we came upon the guard again and handed him our paperwork. He remembered us and stated this must be your lucky day and handed us a random vehicle inspection. Sitting at the inspection point we literally were thinking was this all worth it!?

So, the lesson is to never take your firearm onto a military installation, never lie about having a firearm because you may get a random vehicle inspection. Just think about the consequences we would have had to endure then!

Finally we were close to the lighthouse and all I can say is it was worth it!

We all climbed the 177 steps to the top. The view was wonderful and the breeze off the gulf felt good after that climb. 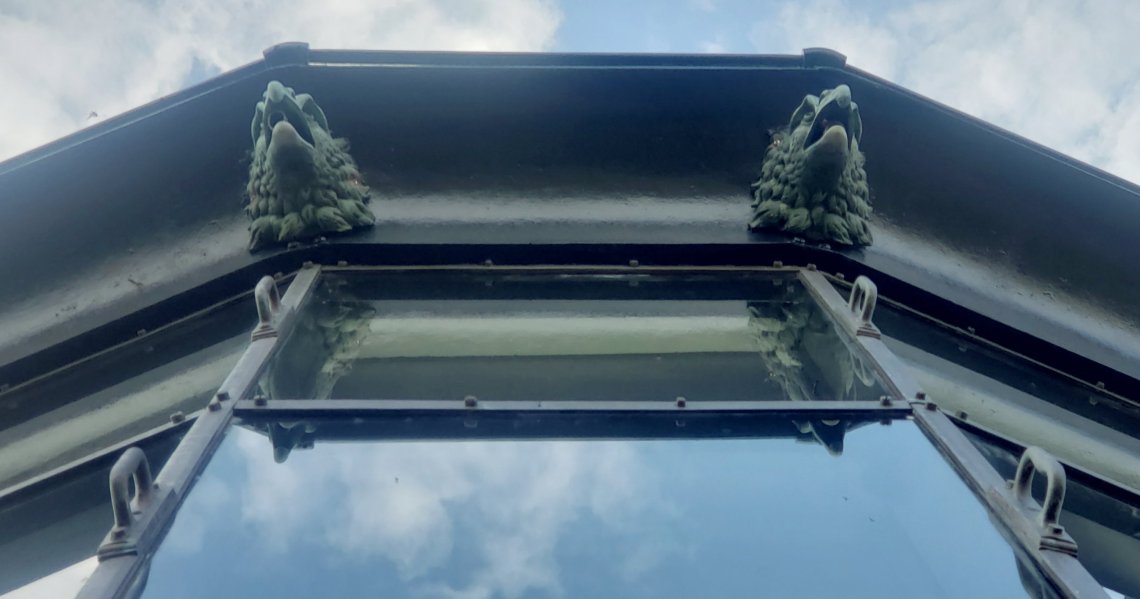 Not sure what this was used for but it must have something to do with the lamp at the top.

You could see Fort Pickens out the windows as you climbed and when you you reached the top.

There was a very nice museum where the lighthouse keepers quarters use to be.

John and I tried to get into character but there wasn’t a bucket hat! 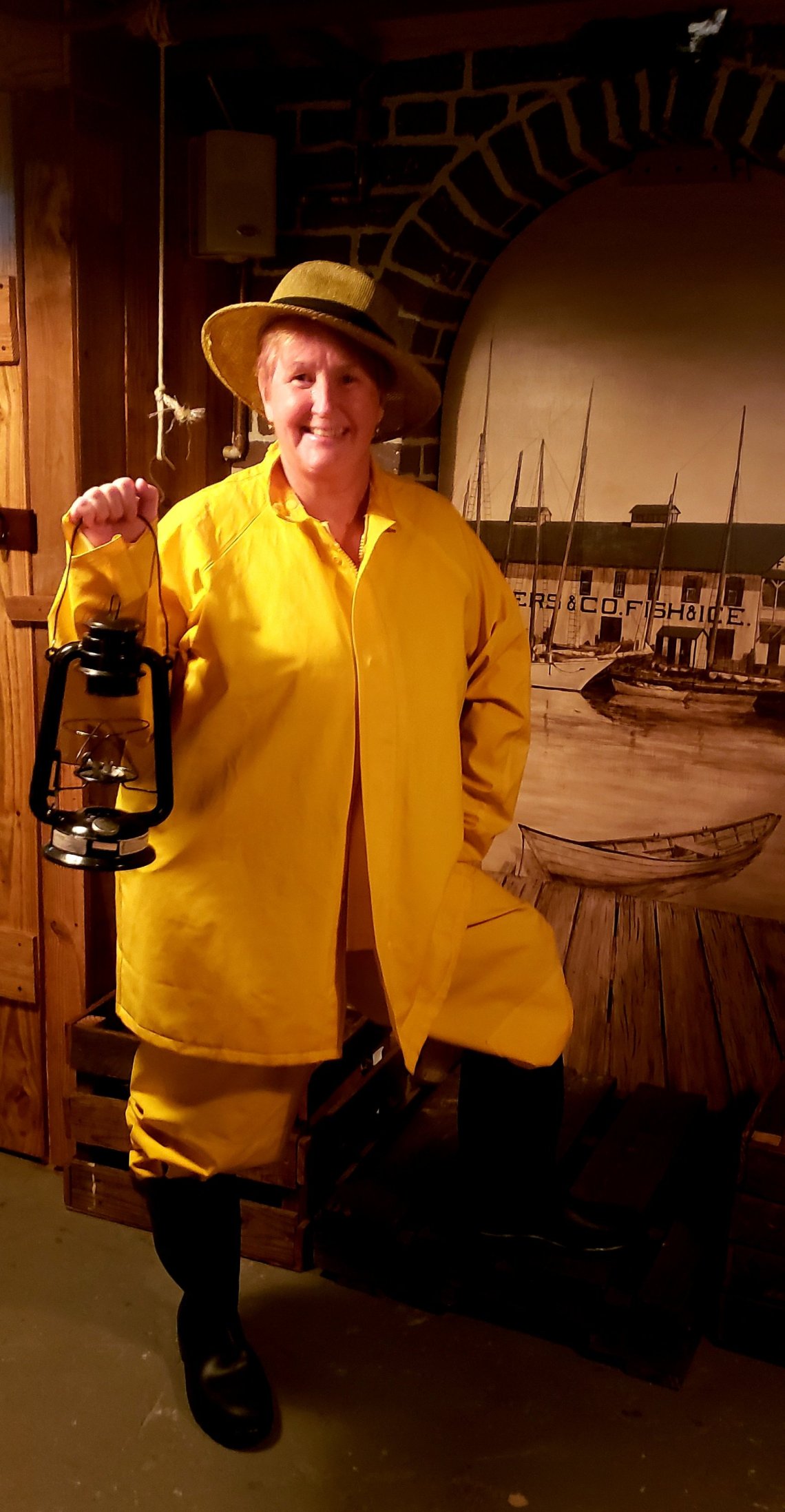 Outside in the garden was an Oil House, an Privy and a 19th century well.

For all my postal friends I think this was actually a replica of one of our stamps.

Story has it that the Pensacola Lighthouse might have a few ghostly residents. 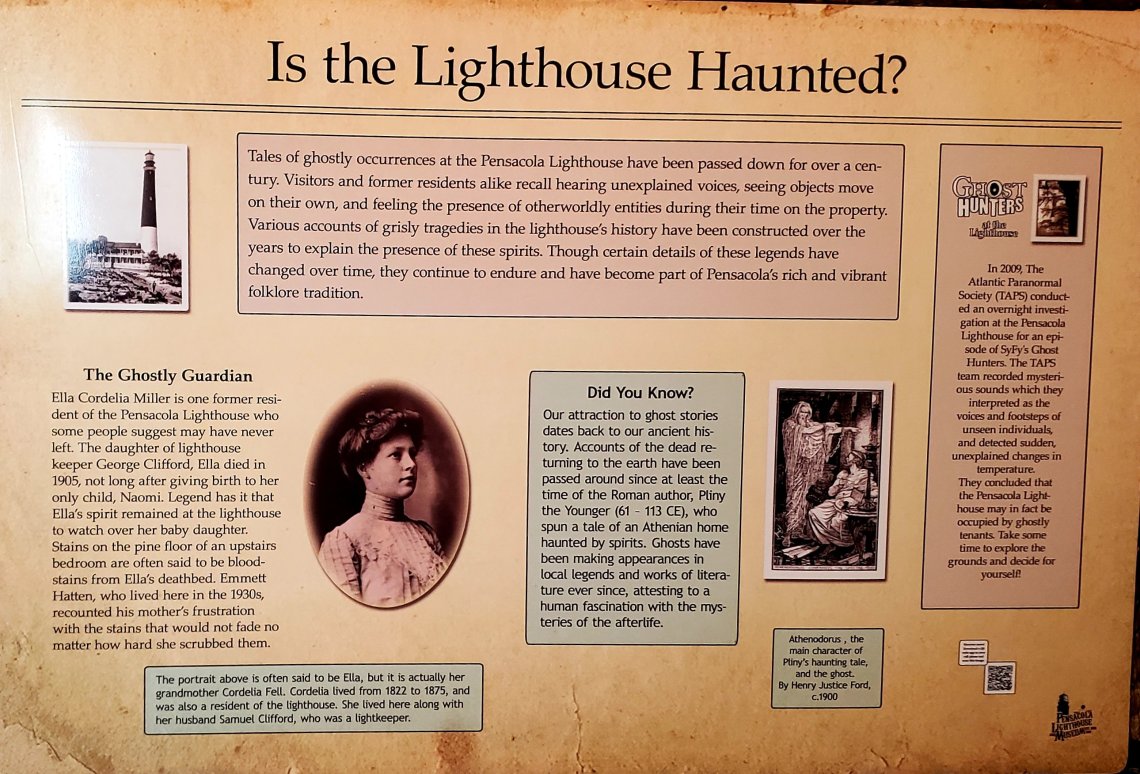 You can find out more interesting ghost stories here:

We have had the most wonderful time here at Fort Pickens. Met a lot of nice people and their fur babies.

I have to say, that this is my second trip to Fort Pickens and I know it won’t be my last because I absolutely love it here.

In the morning we leave for Guf Shores where we will be staying for the next month.

I hope you enjoy our adventures.